A Visual History of Walking Sticks and Canes (Hardcover) 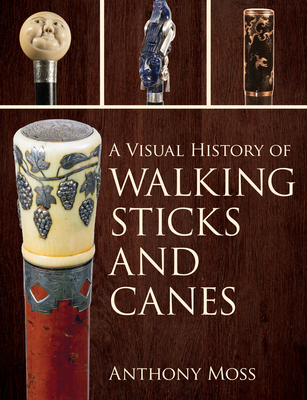 A Visual History of Walking Sticks and Canes (Hardcover)


Email or call for price.
A comprehensive study of walking canes from around the world, dating from the distant past to the modern-day. The book presents a historical context on both practical and ceremonial usage. At the same time, specially shot pictures showcase the celebrated A&D Collection of canes, while enlightening prose demonstrates the cane's enduring relevance to society. More than just a mobility aid, the cane has held numerous offices of significance. From the staff of the legendary Monkey King in the classic Chinese Journey to the West, or the stylised crosiers carried by high-ranking prelates from the Roman Catholic church, to the truncheon wielded by Mr Punch in puppet shows, canes are embedded in the culture of almost every country around the globe. Roving the map with one hand and thumbing through history books with the other, A Virtual History of Walking Canes and Sticks seeks not only to introduce the collector to the diverse wealth of canes available but also to entertain the casual reader. Intermingled with over 800 full-colour pictures are descriptions of gadget canes for tradesmen, squirting canes for pranksters, and glamorous Art Nouveau canes for the dapper gentlemen of the '20s. Informative and meticulously researched, this book paves an accessible route into a niche subject while paying homage to our ongoing relationship with canes. This story stretches back as far as history itself.
Anthony Moss is an avid Rabologist (a collector of walking sticks). He is Joint Chairman of The Antique Walking Cane Society based in London; a Member of The International Society of Cane Collectors based in the USA and regularly attends Canemania, an International Cane Convention. Collecting has always been his craving, starting with collecting books at age 9. He and his wife Deanna married 56 years ago and began collecting Victorian furniture when it was inexpensive. In the 1970s their collecting interests expanded to encompass a wide range of antiques and collectables such as writing instruments, nibs, pencils, and early pens. In 1998 Deanna made the mistake of buying Anthony a few walking canes and thus his passion as a Rabologist began.