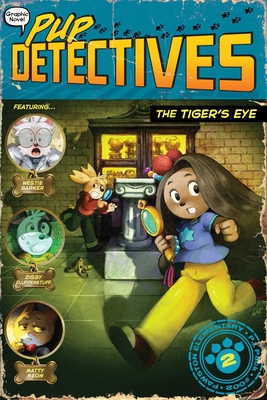 This is book number 2 in the Pup Detectives series.

In this second installment of the funny and stylish new graphic novel series Pup Detectives, the puppy PIs sniff out a statue thief!

Fresh off of their victory in nabbing the lunchtime bandit of Pawston Elementary, Rider Woofson and the rest of the pup detectives are on the lookout for their next case. They don’t have to wait long because before you can say “Bow-Wowza!” a crime occurs—the theft of a precious statue known as the Tiger’s Eye that was on display for Show and Tell.

The suspects are a-plenty, but the key to catching this crook will come from uncovering who had a motive. The PI Pack is up for the challenge...as long as the investigation doesn’t interfere with lunch!
Felix Gumpaw grew up reading kids’ books, so it makes sense that he’s writing them now. And when he isn’t writing books, he’s out solving mysteries around the city of Manhattan, where he lives.