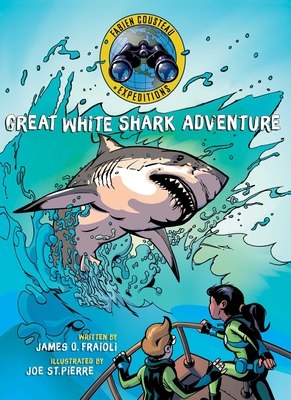 
Email or call for price.
Two young explorers join Fabien Cousteau and his team to get up close and personal with great white sharks in this start to a series of graphic adventure novels.

Junior explorers Bella and Marcus join famed explorer Fabien Cousteau and his research team as they embark on an ocean journey off the coast of South Africa, where the world’s largest concentrations of great white sharks are found. Their mission is to investigate a sighting of a massive white shark, and tag it so they can track and protect it. Along the way, they’ll encounter whales, seals, dolphins, penguins, and a colorful array of other marine life. They’ll also enter a shark cage and come face to face with these powerful creatures.

Dramatic, graphic illustrations and a compelling story help young readers discover tons of facts about sharks and other marine creatures. Children will also learn the many damaging myths about sharks, why they are so misunderstood, and what is being done to protect them from further exploitation and possible extinction.
Fabien Cousteau is the grandson of famed sea explorer Jacques Cousteau, and a third-generation ocean explorer and filmmaker. He has worked with National Geographic, Discovery, PBS, and CBS to produce ocean exploration documentaries and continues to produce environmentally-oriented content for schools, books, magazines, and newspapers. Learn more about his work at FabienCousteauOLC.org.

James O. Fraioli is a published author of twenty-five books and an award-winning filmmaker. Fraioli has traveled the globe alongside experienced guides, naturalists, and scientists, and has spent considerable time exploring and writing about the outdoors. He has served on the Board of Directors for the Seattle Aquarium and works with many environmental organizations. Learn more about his work at VesperEntertainment.com.

"This series opener will appeal most to young shark and science enthusiasts."
— Booklist