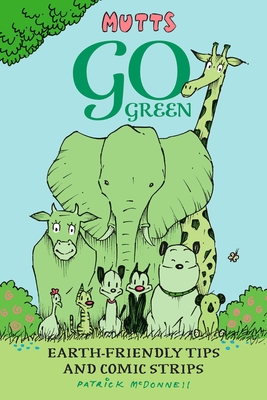 This special collection of MUTTS comics for kids includes eco-friendly lessons on how to keep the environment clean and ways to help create a greener future for our furry friends and future generations. Mutts Go Green draws on Patrick McDonnell's 25-year career of writing and illustrating heartwarming comics starring Earl the dog, Mooch the cat, and a host of other adorable animal friends.

Patrick McDonnell is a New York Times bestselling author, and creator of the comic strip MUTTS, which appears in over 700 newspapers around the globe. He has received numerous awards internationally, including the National Cartoonists Society's highest honor, The Reuben. You can sign up to receive the daily MUTTS strip at MUTTS.com.

The Gift of Nothing was McDonnell's first children's book. In 2014, it was transformed into a chidlren's play commissioned by The Kennedy Center. In 2012, he was awarded the Caldecott Honor for Me . . . Jane). McDonnell has collaborated with author Eckhart Tolle on Guardians of Being.

McDonnell has appeared on CNN, The Today Show, PBS, and the Oprah Winfrey Network. He is a member of the Board of Directors of The Humane Society of the United States, the Fund for Animals, and the Charles M. Schulz Museum. His MUTTS characters have been enlisted by the United States Marines (Toys for Tots) and the American Library Association ("Read!"). They appear on New Jersey Animal Friendly license plates and in animated public service announcements for The Shelter Pet Project. His work has also been animated for a PSA for the NY Philharmonic. MUTTS is currently under development as an animated feature-length film for Twentieth Century Fox.