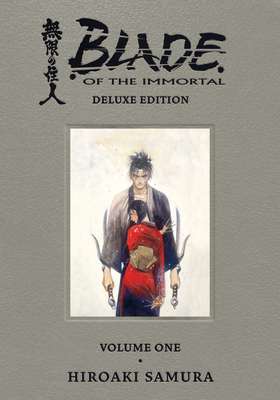 A cursed, seemingly immortal warrior aids a young girl in her quest for revenge, as the students of a brutal new sword school tear a bloody path across Japan. Hiroaki Samura's massive manga series spawned two anime adaptations, a spinoff novel, an art book, and a live-action film! Samura's storytelling tour-de-force also won Japan's Media Arts Award, several British Eagle Awards, and an Eisner Award, among other international accolades. Intense and audacious, Blade takes period samurai action and deftly combines it with a modernist street idiom to create a style and mood like no other work of graphic fiction.

Collects Blade of the Immortal volumes 1 to 3 in the original 7x10 serialized format, in a faux-leather hardcover treatment, and with a bookmark ribbon.
Hiroaki Samura is a Japanese writer/illustrator and creator of Blade of the Immortal, as well as several other short works. He has also done various illustrations for magazines.
“Samura's stark black-and-white drawings combine precision and a gritty, gestural line in riveting, powerfully expressive illustrations . . . Readers will be drawn into this epic tale, even when there are moments they would prefer to look away.”—Publishers Weekly

“Few artists draw samurai manga as well as Hiroaki Samura, whose pages are packed with photorealistic detail while remaining fluid, dynamic, and human.”—OtakuUSA