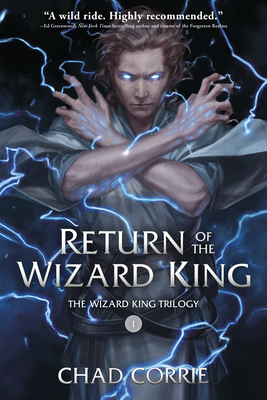 Get in. Get out. Get paid. That was the plan. Instead, these reluctant mercenaries uncover some hidden agendas and ancient power struggles centuries in the making.

The last wizard king seeks a return to Tralodren after nearly eight centuries of exile. But doing so requires the manipulation of a band of mercenaries oblivious to his goals.

The gladiator sold his soul for revenge. The knight's a bigot. The dwarf only cares about regaining his honor. Even the wizardess seems too bookish for anyone's good. But they've all been hired by a blind seer and his assistant to retrieve some forgotten knowledge long hidden away in a jungle-strangled ruin.

Betrayal, madness, adventure, and magic fill this first volume of the Wizard King Trilogy, introducing readers to a world rich in history, faith, and tales of adventure--of which this story is but one of many.

". . . this promising series opener will leave many readers curious to know what comes next."--Publishers Weekly

"Here be roaring monsters to be fought, characters who come vividly to life, and fell magic . . . A wild ride. Highly recommended."--Ed Greenwood, New York Times bestselling author and creator of the Forgotten Realms

"Corrie uses his diverse cast . . . to guide the reader through the narrative, winding through dark paths and brutal action scenes . . . effectively mak[ing] the reader feel like a participant."--Rogues Portal

Chad Corrie has long enjoyed creating things but it wasn't until he was twelve he began writing. Since then he's written comics, graphic novels, prose fiction of varying lengths, and an assortment of other odds and ends.

This sundry collection of works echoes part of his background in which he's been an editor and writer for an online magazine, owned his own publishing company; worked as a pawn broker, bookseller, pizza cook, toy company rep, and magazine/book merchandiser, among other vocational exploits.

A Minnesota native, he continues to make his home in "The Land of Sky Blue Waters."