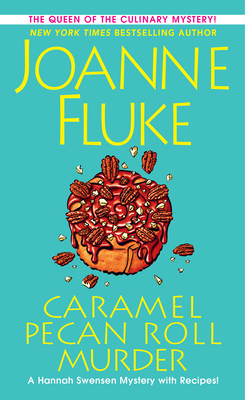 This is book number 25 in the A Hannah Swensen Mystery series.

“Fluke reinforces her place as the queen of culinary cozies.” —Publishers Weekly

Embracing a sweet escape from her usual routine at The Cookie Jar, Hannah gets asked for her help in baking pastries at the local inn for a flashy fishing competition with big prizes and even bigger names. But the fun stops when she spots a runway boat on the water and, on board, the lifeless body of the event’s renowned celebrity spokesperson…

Famed TV show host Sonny Bowman wasn’t humble about his ability to reel in winning catches, and no one knew that better than his tragically overworked sidekick, Joey. Did Joey finally take bloody revenge on his pompous boss—or was Sonny killed by a jealous contestant?

With goodies to bake and a mess of fresh challenges mixed into her personal life, it’s either sink or swim as Hannah joins forces with her sister, Andrea, to catch a clever culprit before another unsuspecting victim goes belly up…

“Delicious-sounding recipes…A final twist will have Fluke's many fans eagerly awaiting the next installment.” —Booklist

Features Over a Dozen Cookie and Dessert Recipes from The Cookie Jar!
Joanne Fluke is the New York Times bestselling author of the Hannah Swensen mysteries, including Chocolate Cream Pie Murder, Raspberry Danish Murder, Cinnamon Roll Murder, and the book that started it all, Chocolate Chip Cookie Murder. Six novels in the series have been adapted for screen as Murder, She Baked, the Hallmark Movies & Mysteries® original television movie franchise starring Alison Sweeney as Hannah, with more to come. Like Hannah Swensen, Joanne Fluke was born and raised in a small town in rural Minnesota, but now lives in Southern California. Please visit her online at JoanneFluke.com.
Praise for Joanne Fluke's Hannah Swensen Mystery Series

“Fluke’s fans call her ‘the queen of culinary capers’—and her stories have shown me just how cozy mysteries can be when food is at the heart of them.” —Bon Appetit

“Fans of the beloved long-running series will revel in another encounter with the familiar cast of characters, all the while relishing the baking frame and the delicious-sounding recipes that are interspersed throughout.” —Booklist on Triple Chocolate Cheesecake Murder

“Many delightful and mouth-watering recipes…Perusing these sweet treats is sure to have the reader salivating without even consuming a morsel!” —New York Journal of Books on Christmas Cupcake Murder

"Cozy mysteries don't get any cozier than Joanne Fluke's, and her latest in the Hannah Swensen series is no exception...The continued antics of Lake Eden's quirky characters make Coconut Layer Cake Murder a treat—everything a cozy mystery should be." —ForeWord Reviews

"Congratulations to Joanne Fluke for pulling us in once again into a world where food is plentiful, true friends are faithful, and someone is always there to help when problems come along." —The Food Channel on Chocolate Cream Pie Murder

"Full of delicious recipes, this novel is sure to give sweet-tooth sleuths a lot to dig into!" —Woman's World on Banana Cream Pie Murder