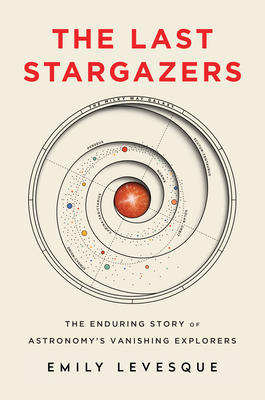 The story of the people who see beyond the stars—an astronomy book for adults still spellbound by the night sky.

Humans from the earliest civilizations through today have craned their necks each night, using the stars to orient themselves in the large, strange world around them. Stargazing is a pursuit that continues to fascinate us: from Copernicus to Carl Sagan, astronomers throughout history have spent their lives trying to answer the biggest questions in the universe. Now, award-winning astronomer Emily Levesque shares the stories of modern-day stargazers in this new nonfiction release, the people willing to adventure across high mountaintops and to some of the most remote corners of the planet, all in the name of science.

From the lonely quiet of midnight stargazing to tall tales of wild bears loose in the observatory, The Last Stargazers is a love letter to astronomy and an affirmation of the crucial role that humans can and must play in the future of scientific discovery.

In this sweeping work of narrative science, Levesque shows how astronomers in this scrappy and evolving field are going beyond the machines to infuse creativity and passion into the stars and space and inspires us all to peer skyward in pursuit of the universe's secrets.

Emily Levesque is a professor at the University of Washington and lives in Seattle. She received her SB in physics from MIT and a PhD from the University of Hawaii. She has won the American Astronomical Society’s Annie Jump Cannon Award and Newton Lacy Pierce Prize, among other awards.

"An astronomy professor captures the human stories—from the quirky to the luminous—of her discipline...entertaining, ardent tales from an era of stargazing that may not last much longer." — Kirkus Reviews

"Levesque does a wonderful job explaining the science behind astronomy as she conveys the awe and beauty of the universe, the dedication of the people who study it, and the excitement of discovery in this fascinating account that will appeal to fans of narrative nonfiction and fellow stargazers." — Library Journal

"The perfect primer for a future astronomer or an amateur astronomy buff, it captures the highlights, lowlights, and day-to-day life of the professional stargazer." — Zach Weinersmith, New York Times bestselling author/illustrator of Soonish and Open Borders

"Childhood stargazers who have since become inquisitive adults, and any fans of Sagan’s Cosmos, will devour this book. " — Booklist

"If you’ve ever wondered what astronomers do—what they really do—and the human journey from the era of eyepieces to gigantic robotic cameras, The Last Stargazers puts you there with compelling honesty, following the scientists and students with hundred-ton telescopes as backdrop." — Erik Asphaug, author of When the Earth Had Two Moons

"Emily Levesque is smart and funny, and her insider’s tale of stars and the astronomers who study them bursts with color and energy." — Edward Dolnick, author of The Clockwork Universe

"It’s like catching a glimpse of the magic behind the curtain galaxies away and leaves you hanging on every spectacular word. A must read for anyone who has looked up at the sky and felt a sense of wonder as well as those considering the world of astrophysics and astronomy." — Tamara Robertson, host of Mythbusters: The Search, STEM speaker

"Emily's book is a compulsive read. It demonstrates what being an observational astronomer is really like—the highs, the lows and the unscheduled things that can happen at telescopes around the world! Give this book to every young person (especially the girls!) that you know who likes math and science." — Jocelyn Bell Burnell, Astrophysicist, Oxford

"Through captivating stories, Levesque gives us both a vivid and accessible inside look at the enigmatic mountain-top astronomers. A unique and engaging read." — Sara Seager, professor of astronomy at MIT

"The awesome endeavours and intellectual adventures in the physical practice and gains in understanding that are the heart and passion of astronomers are gloriously portrayed from the mind of a wonderful practitioner, Emily Levesque. Her range of experiences and insights through the recent period of rapid developments and future planning in this progressive human effort gloriously reach out to everyone." — Professor Alec Boksenberg, former director of the Royal Greenwich Observatory

"Emily Levesque depicts the adventurous life of professional hands-on astronomers, from the top of the Andes, Chile through the Arizona cliffs to Big Island, Hawaii, telling stories of the cosmic silence of an observing night. … I have hugely enjoyed this book. It is engaging, humorous, full of quotes and stories of well-reputed colleagues. To be read, before all astronomical observations become fully automatized!" — Professor Claudia Maraston, Eddington Medal for Astronomy 2018, University of Portsmouth

"The Last Stargazers is perfect for anyone who has ever wondered what it’s like to actually be an astronomer, or who has dreamt of staring up at the stars. Amidst the stories of mishaps and mistakes is a surprisingly romantic view of the glory of exploration, taken one dark night at a time." — Dr. Chris Lintott, BBC The Sky at Night

"Warm, engaging and packed with highly accessible science, The Last Stargazers is thoroughly entertaining and an impetus for readers to take up a little stargazing of their own." — Shelf Awareness

"Emily Levesque's The Last Stargazers takes you on a personal journey through the art, science, frustrations and passion of modern astronomy, especially those ever-evolving mountaintop tools that let us pry secrets out of the sky—those magnificent telescopes." — Brian Keating, author of Losing the Nobel Prize

"Immensely informative and inspiring, The Last Stargazers: The Enduring Story of Astronomy’s Vanishing Explorers is the perfect complement to a summer night under the stars." — BookPage

"The book is replete with anecdotes and the candid narrative style allows the reader a fly-on-the-wall view of the life of an astronomer. " — Nature Astronomy

"Levesque’s writing is witty and honest, and asks us all to reconsider our relationship with the Universe." — Science Focus

"Immensely readable, and worth recommending to anyone who ever saw a constellation, an eclipse or a shooting star, and wondered about giving chase." — Zenger News