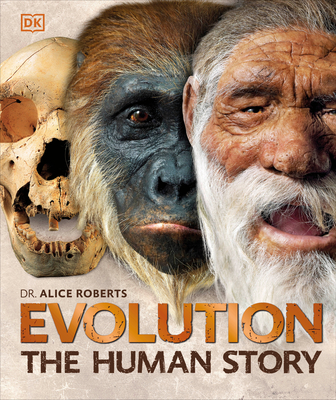 
Usually Ships in 1-5 Days
Travel back in time eight million years to explore the roots of the human family tree.

Interweaving latest discoveries, maps, and incredible illustrations, Evolution tells the story of our origins and helps us better understand our species, from tree-dwelling primates to modern 21st-century humans.

Renowned Dutch paleoartists the Kennis brothers bring our ancestors to life with their beautiful, accurate reconstructions that visually trace each step in our evolutionary history. Combined with clear prose, this comprehensive yet accessible book provides a rich history of each stage of human evolution, from human anatomy and behaviour to the environment we live in. It also explains how Homo sapiens originated, evolved, and then migrated and colonized the entire planet.

Written and authenticated by a team of experts and with a foreword by Dr Alice Roberts, Evolution is a sweeping account of humans and our place in it.
Alice Roberts is a medical doctor who has taught anatomy and conducted research into human origins. An experienced science communicator, she has been Professor of Public Engagement with Science at the University of Birmingham since 2012. Alice made her television debut in 2001 and since then has hosted various BBC science series, including Coast and The Incredible Human Journey, and several episodes of Horizon. She has written seven popular science books, including The Incredible Unlikeliness of Being, which was shortlisted for the Wellcome Book Prize 2015. Alice is also the author of DK's The Complete Human Body.