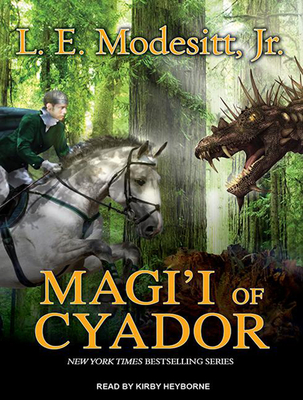 This is book number 10 in the Saga of Recluce (Audio) series.

L. E. Modesitt, Jr., is one of the standard setters in fantasy today, and his most famous series is the Saga of Recluce. Each novel fills in pieces of the history of this land where Chaos and Order strive to maintain a magical balance. Magi'i of Cyador marks the beginning of a new tale from deep within the rich depths of the history of Recluce. This is the story of Lorn, a talented boy born into a family of Magi'i. A diligent student of remarkable talent, Lorn lacks only the single most coveted attribute required of a Magus of Cyador: unquestionable loyalty. Lorn is too independent for his own good. So Lorn is forced to become a lancer officer, and he's sent to the frontier to fight off the all-too-frequent barbarian raids-a career that comes with a fifty percent mortality rate. His enemies don't expect him to survive... Lorn is a fresh, new character who will enrich one of today's most important fantasy series: the saga of Recluce.

Kirby Heyborne, an accomplished actor, musician, and comedian, has received a number of "AudioFile" Earphones Awards and has narrated such titles as "Nick and Nora's Infinite Playlist" by Rachel Cohn and David Levithan, "Black Swan Green" by David Mitchell, and "The Genius" by Jesse Kellerman.