the mermaid's voice returns in this one (Paperback) 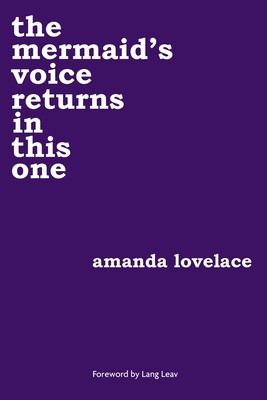 the mermaid's voice returns in this one (Paperback)


Usually Ships in 1-5 Days
Goodreads Choice Award-winning poet and USA TODAY bestselling author Amanda Lovelace presents the mermaid’s voice returns in this one — the third and final installment in her “women are some kind of magic” series, featuring a foreword from Lang Leav and 13 guest poems from leading voices in poetry such as Nikita Gill, KY Robinson, and Orion Carloto.

The mermaid is known for her siren song, luring bedroom-eyed sailors to their demise. However, beneath these misguided myths are tales of escapism and healing, which Lovelace weaves throughout this empowering collection of poetry, taking you on a journey from the sea to the stars. They tried to silence her once and for all, but the mermaid’s voice returns in this one.
Amanda Lovelace is a bestselling American poet who rose to fame through her poetry posted to Tumblr and Instagram. Her works have a feminist character, bringing new versions to traditional tales. She is the author of the women are some kind of magic series, including the award-winning the princess saves herself in this one and women are some kind of magic.
“This is a collection that lives and breathes #MeToo. Each poem isn't necessarily about sexual assault, but rather surviving sexual assault. The final in Lovelace's trilogy of poetry books "Women Are Some Kind of Magic," Lovelace poured herself into every single word of this collection.” (Marie Claire)