The Life and Loves of a He Devil: A Memoir (Paperback) 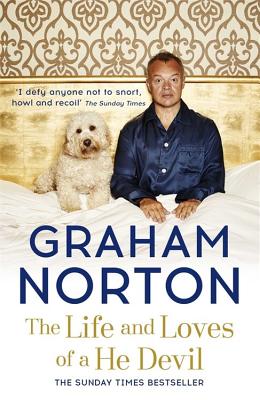 The Life and Loves of a He Devil: A Memoir (Paperback)

'I defy anyone not to snort, howl and recoil' The Sunday Times


'Full of wicked asides, tart observations and sharp remarks that could only have originated in Graham Norton's witty brain.' Terry Wogan


Looking around the room I saw what life really was. It was made up of my passions. I saw my life reflected back at me. People I liked, people I loved, people I had shared half a century with. All the stories of my life were together in that one room and it made me very happy.

Who wouldn't want a friend like Graham Norton? A little bit naughty, full of frank advice, bursting with gossip about the world's biggest stars - but most of all with an emphatic love of life and all its joys, big and small.

Join him - glass of wine in hand, faithful doggy friend by your side - and delve in as he shares the loves of his life.

Graham Norton is one of the UK's most treasured comedians and presenters. Born in Clondalkin, a suburb of Dublin, Norton's first big TV appearance was as Father Noel Furlong on Channel 4's Father Ted in the early 1990s. He then secured a prime time slot on Channel 4 with his chat shows So Graham Norton and V Graham Norton.

Known for his quick wit and flamboyant style Graham began hosting a variety of talent shows on BBC One fromStrictly Dance Fever and Andrew Lloyd Webber's How Do You Solve A Problem Like Maria? to The Eurovision Song Contest and BAFTAs. Graham was soon approached by the BBC to front his own self titled chat show The Graham Norton Show in 2007.

Graham Norton has won 5 BAFTAs for Best Entertainment Performace. He presents a show on BBC Radio 2 every Saturday and also writes, as Agony Aunt, weekly in a column for The Telegraph.