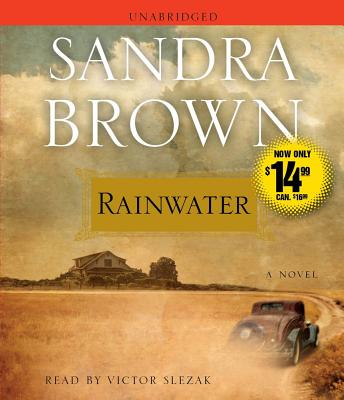 By Sandra Brown, Victor Slezak (Read by)
Email or call for price
Unavailable

A romantic historical novel from the #1 New York Times bestselling author of Seeing Red about an independent woman who runs a boarding house in Dust Bowl Texas.

Ella Baron runs her Texas boarding house with the efficiency of a ship’s captain and the grace of a gentlewoman. She cooks, cleans, launders, and cares for her ten-year-old son, Solly, a sweet but challenging child whose busy behavior and failure to speak elicits undesired advice from others in town. Ella’s plate is full from sunup to sundown. When a room in her boarding house opens up, the respected town doctor brings Ella a new boarder―the handsome and gallant Mr. David Rainwater—but Ella is immediately resistant to opening up her home to this mysterious stranger.

Even with assurances that Mr. Rainwater is a man of impeccable character, a former cotton broker and a victim of the Great Depression, Ella stiffens at the thought of taking him in. Dr. Kincaid tells Ella in confidence that Mr. Rainwater won’t require the room for long: he is dying. Begrudgingly, Ella accepts Mr. Rainwater’s application to board, but she knows that something is happening; she is being swept along by an unusual series of events. Soon, this strong-minded, independent woman will realize that the living that she has eked out for herself in the small bubble of her town is about to change, whether she likes it or not...

Racial tensions, the financial strain of livelihoods in cotton drying up into dust, and the threat of political instability swirl together into a tornado on the horizon. One thing is certain: the winds of change are blowing all over Texas—and through the cracks in the life that Ella Barron has painstakingly built. This is the story of a woman who takes her life’s circumstances in both hands, but who will be forced to reckon with the chaos of her circumstances...

Sandra Brown is the author of seventy-two New York Times bestsellers, has published over eighty novels, and has upwards of eighty million copies of her books in print worldwide. Her work has been translated into thirty-five languages. Four books have been adapted for film. She lives in Texas.

Victor Slezak's films include The Siege, Just Cause, The Bridges of Madison County, and Beyond Rangoon. On television, he appeared in PBS's The Ponder Heart (director Martha Coolidge), and HBO's Path to War (director John Frankenheimer). His Broadway performances include Salome, with Al Pacino, Jackie: An American Life, and The Graduate, opposite Kathleen Turner.

"Brown, a master of contemporary romantic suspense, makes a huge genre leap.... Many will be irresistibly drawn in by this mesmerizing little fable." -- Booklist

"Author Sandra Brown has the golden touch.... Rainwater has a deeply personal feel to it, and there's a careful, loving tone that caries through in its simplicity.... A beautiful little tale with an engaging, timeless feel that's as comfortable as warm apple pie. Here's hoping Brown writes in this style again." -- Deseret News (Salt Lake City)