Ada Twist and the Disappearing Dogs: (The Questioneers Book #5) (Hardcover) 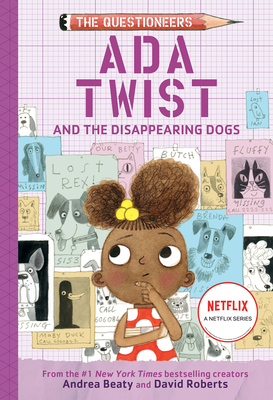 Ada Twist and the Disappearing Dogs: (The Questioneers Book #5) (Hardcover)

A new addition to the bestselling Questioneers chapter book series following Ada Twist, the star of the Netflix TV show!

Blue River Creek has a problem: There's a pet thief on the loose! Or at least, Sofia and Iggy are convinced that there is, once their pets go missing. But as a scientist, Ada knows it's important not to jump to conclusions and to follow the facts. How will they find out what really happened to the town's pets? By using the Scientific Method of course! Through making a hypothesis, collecting data, and experimentation, the Questioneers must find the missing animals before even more pets disappear!

Andrea Beaty is the author of many beloved children’s books, including the bestselling Questioneers series; Attack of the Fluffy Bunnies; Happy Birthday, Madame Chapeau; and One Girl. She lives just outside Chicago.