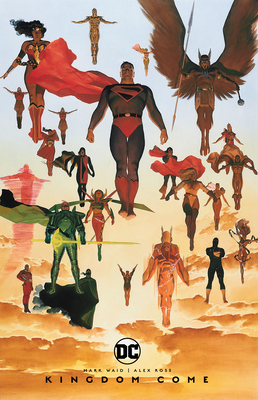 
On Our Shelves Now
In the near-future world of Kingdom Come, superheroes are ubiquitous, but heroism is rare. After decades as Earth's champions, the members of the Justice League have all retreated out of the public eye, replaced with a new generation of crime-fighters whose brand of justice leaves humanity terrified, rather than inspired. But with the planet's future in jeopardy, Superman, Wonder Woman and Batman must come out of retirement to make one last stand for truth and justice...

From comics writer Mark Waid and artist Alex Ross comes this definitive collection of the seminal masterpiece Kingdom Come, with more than 100 pages of sketches, annotations and other behind-the-scenes features.
Mark Waid, a New York Times best-selling author, has written a wider variety of well-known comics characters than any other American comics author, from Superman to the Justice League to Spider-Man to Archie and hundreds of others. His award-winning graphic novel with artist Alex Ross, Kingdom Come, is one of the best-selling comics collections of all time.

Alex Ross first came to prominence as the illustrator of Marvel’s before producing the award-winning Kingdom Come.  With a graphic novel for Vertigo (Uncle Sam), several projects for Marvel Comics, and six oversized graphic novels starring DC's iconic heroes (collected in The World's Greatest Heroes), the top-selling Justice series and more, he continues to bring comics to a broader audience. In 2003, Ross was the subject of a retrospective of his work for DC Comics, Mythology (Pantheon Books), written and designed by Chip Kidd.
“One of the best comic stories ever told.” —Washington Examiner

“No library should be without some edition of this book.” —Library Journal (Starred Review)

“With art that looks like a hybrid of Norman Rockwell and Jack Kirby, artist Ross has become the preeminent painter of superheroes of his generation.” —Publishers Weekly