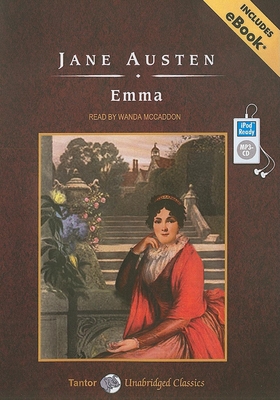 The most perfect of Jane Austen's perfect novels begins with twenty-one-year-old Emma Woodhouse comfortably dominating the social order in the village of Highbury, convinced that she has both the understanding and the right to manage other people's lives for their own good, of course. Her well-meant interfering centers on the aloof Jane Fairfax, the dangerously attractive Frank Churchill, the foolish if appealing Harriet Smith, and the ambitious young vicar Mr. Elton and ends with her complacency shattered, her mind awakened to some of life's more intractable dilemmas, and her happiness assured. Austen's comic imagination was so deft and beautifully fluent that she could use it to probe the deepest human ironies while setting before us a dazzling gallery of characters some pretentious or ridiculous, some admirable and moving, all utterly true.

Jane Austen's delightful, carefully wrought novels of manners--"Pride and Prejudice" and "Emma" among them--are those rare books that offer us a glimpse at the mores of a specific period while addressing the complexities of love, honor, and responsibility that still intrigue us today.

Wanda McCaddon has narrated well over six hundred titles for major audio publishers and has earned more than twenty-five Earphones Awards from "AudioFile" magazine. She has also won a coveted Audie Award, and "AudioFile" has named her one of recording's Golden Voices.

"No one creates silly English characters better than Austen, and Wanda McCaddon is up to the challenge." ---AudioFile