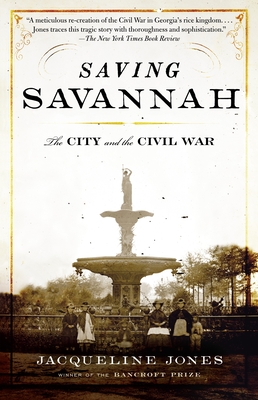 
On Our Shelves Now
In this masterful portrait of life in Savannah before, during, and after the Civil War, prize-winning historian Jacqueline Jones transports readers to the balmy, raucous streets of that fabled Southern port city. Here is a subtle and rich social history that weaves together stories of the everyday lives of blacks and whites, rich and poor, men and women from all walks of life confronting the transformations that would alter their city forever. Deeply researched and vividly written, Saving Savannah is an invaluable contribution to our understanding of the Civil War years.
Jacqueline Jones teaches American history at the University of Texas at Austin. She is the author of several books, including, most recently, A Dreadful Deceit: The Myth of Race from the Colonial Era to Obama’s America. Among her numerous awards are the Taft Prize, the Brown Memorial Prize, the Spruill Prize, the Bancroft Prize (for Labor of Love, Labor of Sorrow), and, in l999, a MacArthur Fellowship. Saving Savannah won the Georgia Historical Society’s 2009 Malcolm Bell, Jr. and Muriel Barrow Bell Award.
“A meticulous re-creation of the Civil War in Georgia’s rice kingdom. . . . Jones traces this tragic story with thoroughness and sophistication.”
—The New York Times Book Review

“An intimate look at a city battered by the tides of history. . . . Few historians have been able to offer such a comprehensive account of how the men and women of a single city could survive such stormy waters.”
—The Atlanta Journal Constitution

“A history rich in social detail and written with deep insight. . . . [The] story of how Savannah and the South was lost to a century of repression and segregation.”
—The Boston Globe

“A compelling social and political history. . . . Jones introduces the voices of numerous slaves, citizens and soldiers as she explores a trove of original sources to create a people’s history of emancipation and the vast social changes it wrought. . . . The guiding insight of Jones’s work is an appreciation of how fully the various stories of the disinherited inform the American narrative.”
—Washington Post Book World

“An important book. . . . Jones tells this story with humanity and precision, giving us a finely wrought, multidimensional portrait of a vanished civilization.”
—Minneapolis Star Tribune

“Excellent. . . . Jones covers every conceivable story in her volume. . . .[Saving Savannah] should be on the bookshelf of every student of the Civil War South.”
—Civil War News

“A profound examination. . . . Stands out from many that carry the label of Civil War–era studies. . . . A wondrous work that doesn’t just dip its toe into the . . . humanity of antebellum and postbellum Southerners of both races. It takes you there, and makes it seem more than worth your time.”
—The Anniston Star

“A sweeping history of Savannah (and environs) before, during, and after the war, with an emphasis on race relations and the black struggle for freedom.”
—Providence Journal

“A detailed, compelling portrait of Georgia’s port city from the decade that preceded the Civil War to the decade that followed it. . . . [A] dramatic panorama of everyday life in Savannah.”
—The Atlanta Journal-Constitution

“Well-written and well-researched. . . . Its real contribution is chronicling the progress and setbacks of Savannah’s slaves.”
—Civil War Book Review

“Moving and meaningful. . . . In this superb study, Jacqueline Jones mobilizes a remarkable cast of characters—black and white, rich and poor, men and women, military and civilian, insider and outsider—to provide a much bigger, richer, and more compelling saga than any we’ve seen before.”
—John C. Inscoe, editor, The New Georgia Encyclopedia

“Penetrating. . . . Jones combines comprehensive research and evocative prose in this study of a Southern city where complex rules of social and economic hierarchy blurred the lines between slavery and freedom well before the Civil War.”
—Publishers Weekly, starred review

“Magnificent in its scope, marvelous in its detail, moving in its telling, Saving Savannah is the art of history at its finest. It is a remarkable, wholly compelling study, one with which historians of the American Civil War simply must engage.”
—Mark M. Smith, author of How Race Is Made: Slavery, Segregation, and the Senses