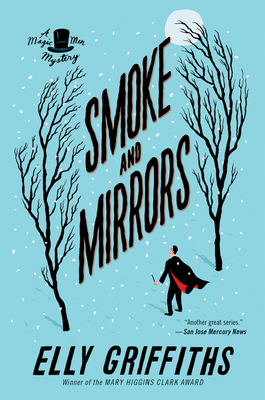 This is book number 2 in the Brighton Mysteries series.

It’s Christmastime in Brighton, and the city is abuzz about magician Max Mephisto’s star turn in Aladdin. But the holiday cheer is lost on DI Edgar Stephens. He’s investigating the murder of two children, Annie and Mark, who were found in the woods alongside a trail of candy—a horrifying scene eerily reminiscent of “Hansel and Gretel.”
Edgar has plenty of leads. Annie, a dark child, wrote gruesome plays based on the Grimms’ fairy tales. Does the key to the case lie in her final script? Or does the macabre staging of the bodies point to the theater and the capricious cast of Aladdin? Edgar enlists Max’s help in penetrating the shadowy world of the theater. But is this all just classic misdirection?

“Excellent . . . Evoking both the St. Mary Mead of Agatha Christie and the theater world of Ngaio Marsh.” — Booklist
ELLY GRIFFITHS is the author of the Ruth Galloway and Brighton mystery series, as well as the standalone novels The Stranger Diaries, winner of the Edgar Award for Best Novel, and The Postscript Murders. She is the recipient of the CWA Dagger in the Library Award and the Mary Higgins Clark Award. She lives in Brighton, England.

"An entertaining read and could be followed up with some of the author’s other novels."--Historical Novel Society   "Griffiths’ success with this series bodes well for future books...will continue to look for the name of Elly Griffiths, no matter which series she is writing."--Bookgasm    "A magician's misdirections may provide the clue that solves three murders in 1950s Brighton. DI Edgar Stephens and his team are desperately seeking two children who have gone missing. Twelve-year-old Mark Webster and his 13-year-old friend Annie Francis came home from school, went out to play, and vanished. When their snow-covered bodies are found, Stephens is desperate to find the killer. Along with sergeants Bob Willis and Emma Holmes, he canvasses the area, questioning everyone, including the owner of the sweets shop near the disappearance and the man the children call Uncle Brian, who has a theater set up in his garage. The investigation leaves Stephens scant time for his old friend Max Mephisto, a famous magician reduced to playing in a pantomime show on Brighton Pier, who wants to help. Not only did they serve together in World War II in a special group recruited by MI5 to fool the Germans, but Max helped Stephens solve a tough case (The Zig Zag Girl, 2015) when he first arrived to serve with the Brighton force. Annie, despite her lower-class background, was extremely bright and wrote plays that cast her friends and relatives. Stunning teacher Daphne Young encouraged her pupil's talent in adapting gruesome versions of fairy tales. But before she can reveal something she realizes may help the police, she's found strangled. Although the team follows every clue, including a possible tie to a 1912 theatrical murder, the solution remains tantalizingly out of reach. A dazzlingly tricky mystery, oddball characters, and an authentic feel for life in post-World War II England."--Kirkus    "Set in Brighton, England, in 1951, Griffith’s captivating sequel to 2015’s Zig Zag Girl finds Det. Insp. Edgar Stephens embroiled in a grim holiday hunt for the murderer of two children. Like an unnerving scene from a fairy tale, a trail of candy in the snow leads to the bodies of Annie Francis, a 13-year-old with a talent for writing, and Mark Webster, her constant companion of similar age. As Stephens searches for a killer, tension grows in the town. Is the murderer the candy-store owner and the last to see them alive, or the quirky bachelor who helped the victims stage plays? Matters become more complicated when magician Max Mephisto, Stephen’s friend, appears with a disturbingly similar tale of an earlier murder. Is an actor in the Christmas pantomime connected to the long-ago murder of a young performer? Are the present-day murders a reenactment? Stephens and his team must sort through misdirection and vanishing acts before another child dies in this suspenseful outing."--Publishers Weekly   "WWII special-ops veterans DCI Edgar Stephens and magician Max Mephisto, the “Magic Men” of The Zig Zag Girl (2015), are back. Two children have been murdered, their bodies left in a bizarre Hansel-and-Gretel tableau. When the teacher of one of the victims is also found dead, the Grimm link becomes even stronger. The investigation plays out in a bitterly cold and snowy winter in 1951 Brighton, shortly before Christmas. The sense of time and place is very strong. The postwar rationing of heating fuel is chilling. Wear warm socks for this one. Griffiths’ ability to assemble a cast of eccentric characters from the townsfolk and the shadowy theater world makes for a credible suspect list, although how the author manages (along with her engaging Ruth Galloway books) to maintain two superlative series is the real mystery here. An excellent —