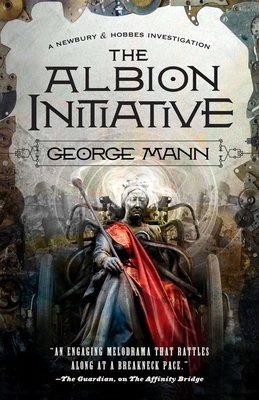 This is book number 6 in the Newbury & Hobbes series.

Queen Victoria has given the order for her agents to move against the Secret Service—to eliminate the fledgling organization with extreme prejudice. Caught in the middle of the conflict, Newbury, Veronica and Bainbridge are forced to face up to the truth: that the Queen no longer represents the best interests of the Empire.

Now rogue and in league with the Queen’s enemies, they must enact the “Albion Initiative”: a desperate plan to break Prince Edward out of Bedlam and install him on the throne in the Queen’s stead. But with the Queen’s executioner and his army on their trail, as well as a possible traitor in their midst, can they do enough to stop the malign tyrant from destroying everything they once swore to protect?

With everything falling apart around them, Newbury and Veronica must uncover the macabre truth behind the crown, and in doing so, unravel the very foundations of the Empire.

GEORGE MANN is the author of the Newbury & Hobbes Investigations, beginning with The Affinity Bridge, and other works of fiction including Ghosts of Manhattan and official Doctor Who tie-in material. He edited the Solaris Book of New Science Fiction anthology series and The Mammoth Encyclopedia of Science Fiction.

For the Newbury & Hobbes Investigations:

“Fluid and engaging…Mann moves nimbly among storylines. He paints his characters in vivid, unforgettable strokes, especially the more ominous ones.”—Los Angeles Times on The Osiris Ritual

“A rousing adventure… Newbury/Hobbes fans will revel.” —Kirkus Reviews on The Immorality Engine

“Mann brought industrial London to life with mysteries, fight scenes, zombies, robots, criminals, red herrings, and some major flirtation between the two protagonists. It was sort of like a Jerry Bruckheimer movie in book form.”—Entertainment Weekly's Shelf Life Blog on The Affinity Bridge

“A welcome return to Mann’s alt-history steampunk world and Newbury and Hobbes’ entertaining, yet darkly occult, investigations. Based on the ending, future volumes will finally tackle the secret agents that oppose mad Queen Victoria’s tyranny.” —Booklist on The Revenant Express

“A wonderful penny dreadful... It's an unashamed galloping romp through the ins and outs of the Victorian metropolis and the lurid generic conventions of adventure fiction.” —Paul Magrs on The Osiris Ritual

“Another fast-paced yarn that shows author George Mann is very likely on to something special here…the story lines are decadent, and Mann has a deft touch at pulling everything together in a way that leaves each installment feeling complete, but also has the reader wanting more.” —North County Times on The Osiris Ritual

“A science fantasy novel that should appeal to lovers of both genres... one of the biggest surprises of the year and I can't recommend the book enough.” —Fantasy Book Critic

“Steampunk is making a comeback, and with this novel Mann is leading the charge….An engaging melodrama that rattles along at a breakneck pace.” —The Guardian