Stone of Tears: Book Two of The Sword of Truth (Paperback) 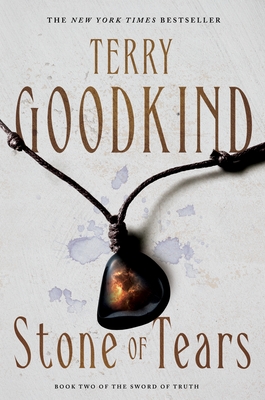 Stone of Tears: Book Two of The Sword of Truth (Paperback)

This is book number 2 in the Sword of Truth series.

The basis for the television show Legend of the Seeker.

Kahlan has at last gained the one goal she had always thought was beyond her grasp ... love. Against all odds, the ancient bonds of secret oaths, and the dark talents of men long dead, Richard has won her heart.

Amid sudden and disastrous events, Richard's life is called due to satisfy those treacherous oaths. To save his life, Kahlan must forsake Richard's love and cast him into the chains of slavery, knowing there could be no sin worse than such a betrayal.

Richard is determined to unlock the secrets bound in the magic of ancient oaths and to again be free. Kahlan, alone with the terrible truth of what she has done, must set about altering the course of a world thrown into war. But even that may be easier than ever winning back the heart of the only man she will ever love.

War, suffering, torture, and deceit lie in their paths, and nothing will save them from a destiny of violent death, unless their courage and faith are joined with luck and they find the elusive...Stone of Tears.