Faith of the Fallen: Book Six of The Sword of Truth (Paperback) 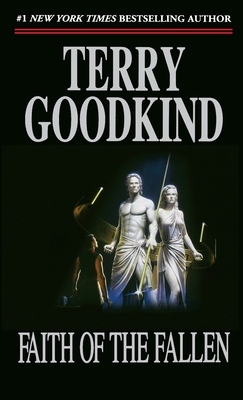 Faith of the Fallen: Book Six of The Sword of Truth (Paperback)

This is book number 6 in the Sword of Truth series.

Terry Goodkind, the #1 New York Times bestselling author of the enormously popular Sword of Truth novels, the basis for the TV show The Legend of the Seeker, has forged another masterful installment with Faith of the Fallen, pitting Richard Rahl and Kahlan Amnell against threats to the freedom of the world that will take them to opposite ends of the world to defeat the forces of chaos and anarchy.

Emperor Jagang is rising once again in the Old World and Richard must face him, on his own turf. Richard heads into the Old World with Cara, the Mord-Sith, while his beloved Kahlan remains behind. Unwilling to heed an ancient prophecy, Kahlan raises an army and goes into battle against forces threatening armed insurrection in the Midlands.

Separated and fighting for their lives, Richard and Kahlan will be tested to the utmost.

“Notable for its engaging secondary characters, the novel also evinces flashes of sly wit, as when an evil Chime takes the form of a menacing chicken. ...Goodkind's ingenious world-building will keep readers captivated by the latest installment of his bestselling Sword of Truth series.” —Publishers Weekly