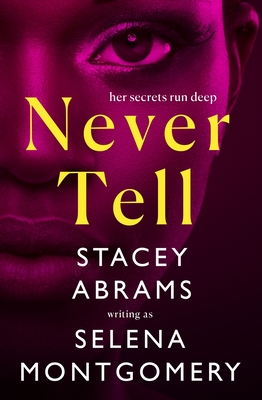 Criminal psychologist Dr. Erin Abbott wants nothing more than to live a quiet life. That means no danger, no intrigue—and absolutely no romance. But when Erin suspects a serial killer is roaming New Orleans, her investigation throws her straight into the arms of the one man who can help her.

Journalist Gabriel Moss is hot to find his next big story—and he knows Erin is onto something that will rock the city to its core. However, Erin is also a mystery he must solve. From the moment they meet, Gabriel senses that she is hiding more than her beauty behind her boxy suits and sensible shoes. When she reluctantly agrees to work with him to uncover the most shocking story they have ever come across, explosive secrets are revealed and danger and passion begin to rise.

Stacey Abrams is an author, serial entrepreneur, nonprofit CEO and political leader. After eleven years in the Georgia House of Representatives, seven as Minority Leader, Abrams became the 2018 Democratic nominee for Governor of Georgia, where she won more votes than any other Democrat in the state’s history. She has founded multiple organizations devoted to voting rights, training and hiring young people of color, and tackling social issues at both the state and national levels; and she is a lifetime member of the Council on Foreign Relations. Abrams is the 2012 recipient of the John F. Kennedy New Frontier Award and the first black woman to become the gubernatorial nominee for a major party in the United States.

“The intense byplay between Erin and Gabriel, as well as the search for the murderer, will keep you reading late into the night. This compelling story is an amazing combination of emotion, suspense and drama.” —Romantic Times

“An exciting roller coaster ride of emotions and passion that at no time eases up...an interesting and dramatic debut that is sure to have readers aching for more.” —Romance in Color on Rules of Engagement

“Selena Montgomery's atypical story deals with many sensitive subjects, and yet has an entertaining undercurrent of suspense and romance. As the story progresses, Montgomery takes readers deeper into the labyrinthine psyches of both protagonists and killer. The suspense is relentless...Never Tell is a well conceived, absorbing read.” —BookLoons

“Fans of romantic suspense will appreciate the innovative plot and adventurous language Selena Montgomery employs in NEVER TELL. Gabe and Erin are engaging characters, and the secondary cast at the newspaper, police station, and college round out the book for an interesting tale that keeps us guessing the killer until the end. A good beach read for the coming hot weather.” —NewandUsed Books

“NEVER TELL is a story filled with emotion, sexual tension, suspense and great characters. The main characters are African American, but the hero and heroine could be any race, as Ms. Montgomery has focused more on what's inside rather than the color of their skins. This story was gripping and kept me guessing to the very end. Ms. Montgomery is sure to be a must-read author. A very good read that I enjoyed very much.” —thebestreviews.com

“Fascinating...a winner!” —Romantic Times on The Art of Desire