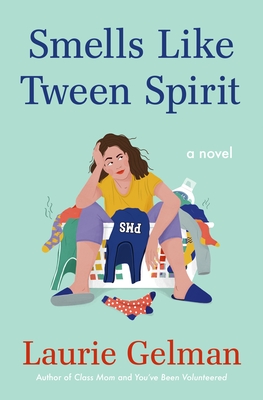 This is book number 4 in the Class Mom series.

From the author of Class Mom and You’ve Been Volunteered comes Laurie Gelman's next laugh-out-loud novel Smells Like Tween Spirit.

As a new Mat Mom of the Pioneer Middle School (PMS) Wrestling team, Jen Dixon finds herself thrown in the middle of the “guerrilla war against so-called perfect mothers," armed only with her cutting wit and acerbic sense of humor. (New York Times Book Review)

Handling a whole host of new challenges, from the dreaded seventh-grade science fair to a school fundraiser (again!), Jen faces the somewhat-terrifying new social dynamics of the wrestling moms with her trademark combination of reluctance and exceptional delivery.

Between school events and teaching spin classes, Jen finds herself fully immersed in sports mom competitiveness. These parents seem perfectly unassuming, until their kids start to wrestle, and they become raging pubescent monsters. Learning to navigate this new world while fielding calls from the principal because of Max’s newfound misogynistic behavior, Jen steels herself for the indignities of middle-school life—with her loyal spin class attendees and her bossy four-year-old granddaughter giving her the strength she needs to press on.

Mix in a Parent Night, New Year’s Party, and Valentine’s Day Dance, and Jen Dixon certainly has her hands, and her calendar, full. And through it all, Jen continues to charm with her riotously funny quips and memorable one-liners.

Laurie Gelman was born and raised in the Great White North. She spent twenty-five years as a broadcaster in both Canada and the United States before trying her hand at writing novels. The author of Class Mom and You’ve Been Volunteered, Laurie has appeared on Live with Kelly and Ryan, Watch What Happens Live, and The Talk, among others. She lives in New York City with her husband, Michael Gelman, and their two teenage daughters.

“Nobody captures modern-day parenting trials, tribulations and dynamics with more hilarious accuracy than Laurie Gelman does. Smells Like Tween Spirit is another simultaneously riotous and touching glimpse inside the head and life of Jen Dixon, whose acerbic wit and good intentions charm from the very first page of this perfect beach read.”
—Lauren Gershell, co-author of That’s What Frenemies Are For

“Laurie Gelman has hit it again out of the ballpark with her laugh-out-loud new book, Smells Like Tween Spirit. Although I am not personally a ‘mat mom’—I am a ‘baseball mom’—her new book had me in hysterics from page one till the very last page. This book is for every mom with a tween.”
—Lyss Stern, Founder of Divamoms.com and author of Motherhood Is A B#tch

“In Smells Like Tween Spirit, Laurie Gelman once again captures a certain corner of the world with great insight and copious good humor. And in the most breezy, entertaining way possible, she encompasses the whole messy human experience: children, parents, friendship, identity, and marriage. Jen Dixon, Gelman’s heroine of the Class Mom series, is one of a kind—colorful, brilliant and wonderfully sharp around the edges. In other words, a gem.”
—Jess Cagle, SiriusXM chief entertainment anchor and host of The Jess Cagle Show

“Gelman’s new Class Mom novel doesn’t disappoint: it will leave readers laughing out loud and desperate for the next installation in this hilarious, beloved series.”
—Library Journal, *starred*

“Readers will speed through this witty, pithy tale that brings back Jen’s lovable snark to delightful effect. This winning sequel lives up to its predecessors.”
—Publishers Weekly

“Fans of the series will be thrilled to see more of Jen and the family, and newcomers will want to learn more about this quirky family…Gelman’s storytelling is fun and engaging, and she promises she’s only just getting started.”
—Booklist