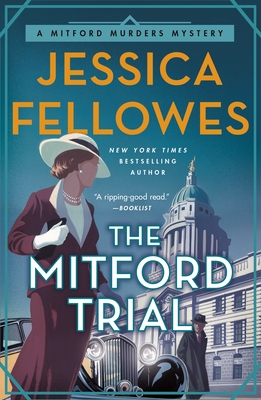 This is book number 4 in the The Mitford Murders series.

A timeless murder mystery with the fascinating, glamorous Mitford sisters at its heart, The Mitford Trial is the fourth installment in the Mitford Murders series from Jessica Fellowes, inspired by a real-life murder in a story full of intrigue, affairs and betrayal...

It's lady's maid Louisa Cannon's wedding day, but the fantasy is shattered shortly after when she is approached by a secretive man asking her to spy on Diana Mitford—who is having an affair with the infamous Oswald Mosley—and her sister Unity.

Thus as summer 1933 dawns, Louisa finds herself accompanying the Mitfords on a glitzy cruise, full of the starriest members of Society. But the waters run red when a man is found attacked.

Back in London, the case is taken by lawyer Tom Mitford, and Louisa finds herself caught between worlds: of a love lost, a family divided, and a country caught in conflict.

"Inspired by the larger-than-life Mitford family and a real-life murder, Fellowes delivers a ripping-good read." - Booklist

"If you like your historical capers served with a side of murder, consider the sleuthing adventures of Louisa Cannon, occasional amateur detective and erstwhile servant to the Mitfords, real-life aristocratic siblings – Nancy, Diana, Unity, Pamela, Decca, Debbo – who all made their mark upon the 20th century . . . Sparkly." - The Globe and Mail ("Loved Bridgerton? You'll Fall for this Crop of New Escapist Historical Fiction"

"A solid continuation of the series . . . hopefully it's not [the last]." - RedCarpetCrash