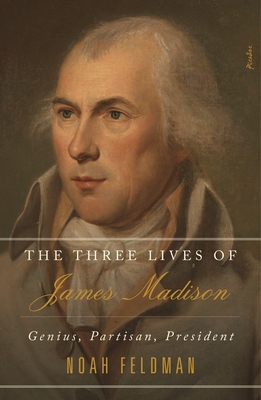 A sweeping reexamination of the Founding Father who transformed the United States in each of his political “lives”—as a revolutionary thinker, as a partisan political strategist, and as a president

“In order to understand America and its Constitution, it is necessary to understand James Madison.”—Walter Isaacson, #1 New York Times bestselling author of Leonardo da Vinci

Over the course of his life, James Madison changed the United States three times: First, he designed the Constitution, led the struggle for its adoption and ratification, then drafted the Bill of Rights. As an older, cannier politician he co-founded the original Republican party, setting the course of American political partisanship. Finally, having pioneered a foreign policy based on economic sanctions, he took the United States into a high-risk conflict, becoming the first wartime president and, despite the odds, winning.

Now Noah Feldman offers an intriguing portrait of this elusive genius and the constitutional republic he created—and how both evolved to meet unforeseen challenges. Madison hoped to eradicate partisanship yet found himself giving voice to, and institutionalizing, the political divide. Madison’s lifelong loyalty to Thomas Jefferson led to an irrevocable break with George Washington, hero of the American Revolution. Madison closely collaborated with Alexander Hamilton on the Federalist papers—yet their different visions for the United States left them enemies.

Alliances defined Madison, too. The vivacious Dolley Madison used her social and political talents to win her husband new supporters in Washington—and define the diplomatic customs of the capital’s society. Madison’s relationship with James Monroe, a mixture of friendship and rivalry, shaped his presidency and the outcome of the War of 1812.

We may be more familiar with other Founding Fathers, but the United States today is in many ways Madisonian in nature. Madison predicted that foreign threats would justify the curtailment of civil liberties. He feared economic inequality and the power of financial markets over politics, believing that government by the people demanded resistance to wealth. Madison was the first Founding Father to recognize the importance of public opinion, and the first to understand that the media could function as a safeguard to liberty.

The Three Lives of James Madison is an illuminating biography of the man whose creativity and tenacity gave us America’s distinctive form of government. His collaborations, struggles, and contradictions define the United States to this day.

Noah Feldman is the Felix Frankfurter Professor of Law at Harvard University as well as a Senior Fellow of the Society of Fellows and a member of the American Academy of Arts and Sciences. He is a contributing writer for Bloomberg View.

Before joining the Harvard faculty, Feldman was Cecelia Goetz Professor of Law at New York University School of Law. He was named a Carnegie Scholar in 2005. In 2004, he was a visiting professor at Yale Law School and a fellow of the Whitney Humanities Center. In 2003, he served as senior constitutional advisor to the Coalition Provisional Authority in Iraq, and advised members of the Iraqi Governing Council on the drafting of the Transitional Administrative Law or interim constitution. He served as a law clerk to Justice David H. Souter of the U.S. Supreme Court (1998–1999). Selected as a Rhodes Scholar, he earned a D. Phil. in Islamic Thought from Oxford University and a J.D. from Yale Law School, serving as Book Reviews Editor of the Yale Law Journal. He received his A.B. summa cum laude in Near Eastern Languages and Civilizations from Harvard University in 1992, finishing first in his class.

He is the author of several books, including Cool War: The Future of Global Competition; the award winning and acclaimed Scorpions: The Battles and Triumphs of FDR’s Great Justices; The Fall and Rise of the Islamic State; Divided By God: America's Church-State Problem and What We Should Do About It; and After Jihad: America and the Struggle for Islamic Democracy. With Kathleen Sullivan, he coauthored textbooks on constitutional and first amendment law. He has worked as a contributing writer for the New York Times Magazine.

“Illuminating and absorbing . . . [Noah] Feldman’s deeply thoughtful study shows that the three identities of James Madison constituted one exceptional life, which effectively mirrored the evolving identity of the American republic in its most formative phase. In Feldman’s capable hands, Madison becomes the original embodiment of our ‘living Constitution.’”—Susan Dunn, The New York Times Book Review

"[A] refreshingly circumspect biography . . . Feldman offers fresh insight into a man who played an outsized role in our nation’s founding as well as a lucid account of the history of those years." —Justice John Paul Stevens (Ret.), Michigan Law Review

“Grand . . . Feldman is a very accessible and quietly stylish writer, and his approach to his subject is a fresh one.”—Esquire

“Groundbreaking . . . The Three Lives of James Madison studies all the aspects of Madison’s complicated public career, as both the main author of the Constitution to the country’s first wartime president to the co-founder of the Democratic-Republican Party . . . [Feldman is] uniformly excellent on Madison the political creature, which can’t help but resonate with the present day . . . [A] superb account.”—Steve Donoghue, The Christian Science Monitor

“Feldman, the Felix Frankfurter Professor of Law at Harvard Law School, has written . . . a palliative for the age of Trump that never names the current president, as told through the political evolution of an important weirdo whose constant recalibrations enabled him, with increasing success, to fight epic battles with his own, founding era ‘haters and losers’ . . . At once subtle and candid . . . [this book’s] timely message is actually evergreen: the extreme partisanship that leaves us in varying states of frustration, alarm, and paranoia has always been a condition of the American experiment.” —Alexis Coe, The New Yorker

“A welcome addition to Madison scholarship. Feldman’s writing is crisp, his organization is sound, and his analysis is first-rate. He is an obvious admirer of his subject, but his work never lapses into hagiography. For example, he is unblinking in his analysis of Madison’s failures on the issue of slavery, and he rightly calls Madison out for his habit of seeing in his political opponents (such as Hamilton) a creeping antirepublicanism . . . Feldman has crafted a work that will be essential for Madison scholars and helpful for lay readers interested in studying the “Father of the Constitution” in more detail.” —Jay Cost, National Review

“James Madison was instrumental in framing the constitutional government that serves the American people today . . . This is an insightful examination on how theories and ideals are applied and changed by real-life circumstances.”—Library Journal

“The most stimulating political book that I have read in as long as I can remember. Madison was a young genius obsessed with the idea of constitution-making and government structure and who, in his early twenties, started designing the American government. Almost every debate we’re having now about politics comes back in some way or another to Madison’s vision and the questions Madison was thinking about in the 1770s and 1780s . . . Madison was way more important to our country than Hamilton was.”—Jacob Weisberg, editor in chief of The Slate Group and author of The Bush Tragedy

“Feldman brings a scholarly rigor and a gift for narrative to this impressive account of the sprawling—and often perplexing—life of James Madison.”—Jon Meacham, Pulitzer Prize-winning author of Thomas Jefferson: The Art of Power

“Feldman gives us a rich portrait of our fourth president in all his many aspects: constitution maker, politician, partisan, friend, slaveholder, husband, president, and elder statesman. The result is a fresh, bold, and much-needed look at a pivotal figure in American and, therefore, world history.”—Annette Gordon-Reed, Pulitzer Prize–winning author of The Hemingses of Monticello: An American Family

“Feldman, combining laudable scholarship with delightful writing, does a brilliant job of showing how Madison’s precise and reasoned mind, along with his personal friendships and rivalries, created our code as a nation.”—Walter Isaacson, #1 New York Times bestselling author of Leonardo da Vinci

“Feldman skillfully explains the evolving genius of Madison with precision and clarity. The result is a narrative both epic in scope and intimate in detail.”—David S. Heidler and Jeanne T. Heidler, authors of Washington’s Circle: The Creation of the President