Agent to the Stars (Paperback) 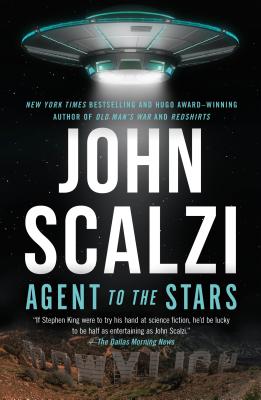 Agent to the Stars (Paperback)

From New York Times bestseller and Hugo Award-winner, John Scalzi, a trade paperback repackage of his gleeful mash-up of science fiction and Hollywood satire—now with a new cover!

The space-faring Yherajk have come to Earth to meet us and to begin humanity's first interstellar friendship. There's just one problem: they're hideously ugly and smell like rotting fish.

So getting humanity's trust is a challenge. The Yherajk need someone who can help them close the deal.

Enter Thomas Stein, who knows something about closing deals. He's one of Hollywood's hottest young agents. But although Stein may have just concluded the biggest deal of his career, it's quite another thing to negotiate for an entire alien race. To earn his percentage this time, he's going to need all the smarts, skills, and wits he can muster.

The Interdepency Sequence
1. The Collapsing Empire
2. The Consuming Fire

JOHN SCALZI is one of the most popular SF authors of his generation. His debut Old Man's War won him the John W. Campbell Award for Best New Writer. His New York Times bestsellers include The Last Colony, Fuzzy Nation,and Redshirts (which won the 2013 Hugo Award for Best Novel), and 2020's The Last Emperox. Material from his blog, Whatever, has also earned him two other Hugo Awards. Scalzi also serves as critic-at-large for the Los Angeles Times. He lives in Ohio with his wife and daughter.

Praise for Agent to the Stars

"Thoughtful and down-to-Earth, Agent to the Stars is a thoroughly enjoyable work, reminiscent of Robert A. Heinlein or Spider Robinson, and a nice change of pace from the less optimistic SF out there." —SFSite.com

"A humorous read and, because of it’s personable writing style, a book I’d recommend to someone usually intimidated by reading Science Fiction." —SF Signal

"Provocative and unexpected." —The Wall Street Journal on The Collapsing Empire

"Scalzi continues to be almost insufferably good at his brand of fun but think-y sci-fi adventure." —Kirkus Reviews on The Collapsing Empire

"If anyone stands at the core of the American science fiction tradition at the moment, it is Scalzi."
—The Encyclopedia of Science Fiction, Third Edition

"Scalzi is a master at creating appealing commercial fiction."
—Kirkus Reviews, starred review, on Lock In