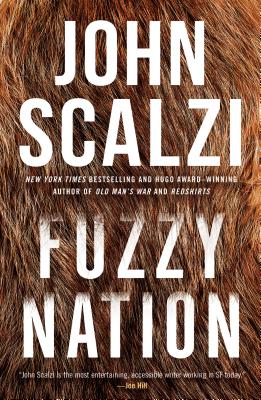 From New York Times bestseller and Hugo Award-winner John Scalzi, a trade paperback repackage of his extraordinary retelling of the SF classic Little Fuzzy—now with a new cover!

ZaraCorp holds the right to extract unlimited resources from the verdant planet Zarathustra—as long as the planet is certifiably free of native sentients. So when an outback prospector discovers a species of small, appealing bipeds who might well turn out to be intelligent, language-using beings, it's a race to stop the corporation from "eliminating the problem," which is to say, eliminating the Fuzzies—wide-eyed, ridiculously cute small furry creatures—who are as much people as we are.

The Interdepency Sequence
1. The Collapsing Empire
2. The Consuming Fire

JOHN SCALZI is one of the most popular SF authors of his generation. His debut Old Man's War won him the John W. Campbell Award for Best New Writer. His New York Times bestsellers include The Last Colony, Fuzzy Nation,and Redshirts (which won the 2013 Hugo Award for Best Novel), and 2020's The Last Emperox. Material from his blog, Whatever, has also earned him two other Hugo Awards. Scalzi also serves as critic-at-large for the Los Angeles Times. He lives in Ohio with his wife and daughter.

“A perfectly executed plot clicks its way to a stunning courtroom showdown in a cathartic finish that will thrill Fuzzy fans old and new.” —Publishers Weekly, starred review

“In a genre flooded with bloated epics, it's a real pleasure to read a story like this, as compactly and directly told as a punch to the stomach.” —Kirkus Reviews, starred review

"The perfect novel to...spark a lifelong love affair with science fiction and all it has to say about how we treat one another, how we treat the rest of the universe, and what we do when the circumstances offer us the chance to sell out our integrity for fortune." —BoingBoing

"The insanely cute Fuzzys (Scalzi's deep affection for critters is on full display here) and a real affection for Piper's original material, and you've got a book that can't miss." —BoingBoing

"Provocative and unexpected." —The Wall Street Journal on The Collapsing Empire

"Scalzi continues to be almost insufferably good at his brand of fun but think-y sci-fi adventure." —Kirkus Reviews on The Collapsing Empire

"If anyone stands at the core of the American science fiction tradition at the moment, it is Scalzi."
—The Encyclopedia of Science Fiction, Third Edition

"Scalzi is a master at creating appealing commercial fiction." —Kirkus Reviews, starred review, on Lock In