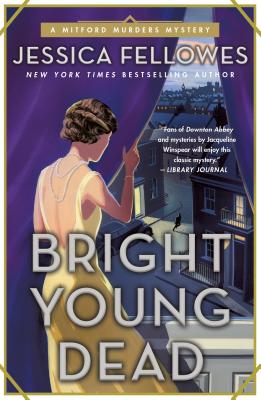 This is book number 2 in the The Mitford Murders series.

"True and glorious indulgence. A dazzling example of a golden age mystery." —Daisy Goodwin, author of Victoria and The American Heiress on The Mitford Murders

Meet the Bright Young Things, the rabble-rousing hedonists of the 1920s whose treasure hunts were a media obsession. One such game takes place at the 18th birthday party of Pamela Mitford, but ends in tragedy as cruel, charismatic Adrian Curtis is pushed to his death from the church neighbouring the Mitford home.

The police quickly identify the killer as a maid, Dulcie. But Louisa Cannon, chaperone to the Mitford girls and a former criminal herself, believes Dulcie to be innocent, and sets out to clear the girl's name . . . all while the real killer may only be steps away.

“Fellowes excels at depicting the inherent tensions between the upper classes and their servants.”—Publishers Weekly

“Fellowes captures the style and frenetic energy or the ‘bright young things’ of the upper class in the Roaring Twenties. The characters are engaging, and the story’s historical basis makes it ring true. Fans of Downton Abbey and mysteries by Jacqueline Winspear will enjoy this classic mystery.”—Library Journal

"With [servant] Louisa Cannon and Constable Mary Moon, Fellowes shows how a woman with intelligence tries to navigate in a man's world. The dual mysteries in Bright Young Dead provide variety for mystery readers...Exciting."—Fresh Fiction

Praise for The Mitford Murders:

“The members of the real-life Mitford family figure prominently in British author Fellowes’s appealing fiction debut (after The World of Downton Abbey, about the hit TV show created by her uncle, Julian Fellowes)....[with] a satisfying ending.” —Publishers Weekly

“Downton Abbey meets Agatha Christie in this witty and twisty mystery imagining a 16-year-old Nancy Mitford teaming up with her household to help Louisa solve a murder in England in 1920.” —In Touch Weekly

"A real murder, a real family and a brand new crime fiction heroine are woven together to make a fascinating, and highly enjoyable, read. I loved it." —Julian Fellowes, creator and writer of Downton Abbey and Belgravia

"Exactly the sort of book you might enjoy with the fire blazing, the snow falling etc. The solution is neat and the writing always enjoyable." —Anthony Horowitz, New York Times bestselling author of Magpie Murders

"Oh how delicious! This terrific start to what promises to be a must-read series is exactly what we all need in these gloomy times. Inventive, glittering, clever, ingenious. I devoured The Mitford Murders... so will you."
—Susan Hill, author of The Woman in Black

"True and glorious indulgence. A dazzling example of a golden age mystery." —Daisy Goodwin, author of Victoria and The American Heiress

“A lively, well-written, entertaining whodunit of the old-fashioned school—and that is meant as a compliment.” —The Times (UK)

"This is a chocolate soufflé of a novel: as the enthralling mystery heats up, so the addictive deliciousness of the story rises. But The Mitford Murders is not only an ingeniously twisty thriller; it is also a heart-wrenching, heart-healing story about friendship, trust, betrayal and love: the sort of book you never want to end." —Juliet Nicolson, author of A House Full of Daughters

“There are several ready-made markets for this novel by the niece of the writer Julian Fellowes: fans of Downton Abbey, aficionados of Golden Age crime, and those with an appetite for the privileged world of the Mitford sisters." —Financial Times (UK)

"A Golden Age homage that flits between an England broken by World War I and the gilded milieu of the aristocracy....Jessica Fellowes' deliciously immersive, effortlessly easy novel has a strong feel for period and a rollicking plot...The glamorous Mitfords add to the value too."—Metro

"The Mitford Murders are very much in the ilk of an Agatha Christie novel...Perfect for those missing their Downton Abbey fix."—Belfast Telegraph