When Reagan Sent In the Marines: The Invasion of Lebanon (Hardcover) 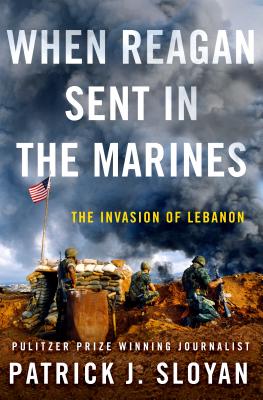 "In this formidable narrative, the prize-winning and super honest reporter, Patrick Sloyan, adds the depth of a scholar's context to produce a gripping reminder of why we should never forget history. He makes readers feel like they were eye witnesses." —Ralph Nader

From a Pulitzer Prize-winning journalist who reported on the events as they happened, an action-packed account of Reagan's failures in the 1983 Marines barracks bombing in Beirut.

On October 23, 1983, a truck bomb destroyed the U.S. Marines barracks in Beirut. 241 Americans were killed in the worst terrorist attack our nation would suffer until 9/11. We’re still feeling the repercussions today.

When Reagan Sent In the Marines tells why the Marines were there, how their mission became confused and compromised, and how President Ronald Reagan used another misguided military venture to distract America from the attack and his many mistakes leading up to it.

Pulitzer Prize-winning author Patrick J. Sloyan uses his own contemporaneous reporting, his close relationships with the Marines in Beirut, recently declassified documents, and interviews with key players, including Reagan’s top advisers, to shine a new light on the Israeli invasion of Lebanon and Reagan’s doomed ceasefire in Beirut.

Sloyan draws on interviews with key players to explore the actions of Kissinger and Haig, while revealing the courage of Marine Colonel Timothy Geraghty, who foresaw the disaster in Beirut, but whom Reagan would later blame for it.

More than thirty-five years later, America continues to wrestle with Lebanon, the Marines with the legacy of the Beirut bombing, and all of us with the threat of Mideast terror that the attack furthered. When Reagan Sent In The Marines is about a historical moment, but one that remains all too present today.

PATRICK J. SLOYAN was a Pulitzer Prize-winning journalist who had covered national and international affairs since 1960. He was awarded journalism's most distinguished prizes for domestic and foreign reporting, including the Pulitzer Prize for International Reporting and Spot News Reporting, the George Polk Award for War Reporting, the American Society of Newspaper Editors Award for Deadline Writing, and the Raymond Clapper Award for Investigative Reporting. Sloyan wrote for Rolling Stone, The New Republic, The Nation, and The London Guardian. He died in 2019 after completing When Reagan Sent In the Marines.

Praise for When Reagan Sent In the Marines

"In this formidable narrative, the prize-winning and super honest reporter, Patrick Sloyan, adds the depth of a scholar's context to produce a gripping reminder of why we should never forget history. He makes readers feel like they were eye witnesses." —Ralph Nader

"Pulitzer Prize-winning journalist Sloyan succinctly chronicles the decades of hostility toward the American government before the suicide truck bombing, with much of that ill will related to U.S. support of Israel...The Beirut attacks proved not to be an isolated incident; they inspired Osama bin Laden to spread the word that terrorism against the U.S. was effective, a message that reached its horrible apotheosis on 9/11. Sloyan portrays the president at the time, Ronald Reagan, as an uninformed chief executive who shared the viewpoints of his hawkish military and civilian aides." —Kirkus

Praise for The Politics of Deception

“This riveting book is a compelling read….With dogged persistence, scrupulous archival work and firsthand interviews, [Sloyan] has turned on its ear the sanitized history of the last year of John F. Kennedy's presidency….[a] solid, reliable narrative.” —The Washington Times

“This study will appeal to general readers and researchers intrigued by the Kennedy mystique and its relationship to reality by showing the pragmatic president as part of a long-standing tradition of hard-nosed decision makers, a fact that tempered his idealism.” —Library Journal

“The Politics of Deception is filled with the drama and dialogue of a best-selling thriller. That's because the stories are factual and its author, Pulitzer Prize-winner Pat Sloyan, is a captivating wordsmith. As a White House reporter, Pat witnessed these events unfold, and his meticulous research on newly released records bolsters this exciting expose of President John F. Kennedy's three biggest crises. Pat's riveting revelations are certain to make you question much of what you learned in history class.” —Don Fulsom, author of Nixon's Darkest Secrets

“Pat Sloyan for five decades has exhibited fierce integrity, honesty, diligence, and factual news judgment like few in his profession. A stickler for journalistic ethics, he has rejected official source journalism whenever truth was the alternative.” —Ralph Nader

“In the fraternity of Washington reporters, Sloyan is a brand name for integrity, hard digging to get at buried truths and hard-wired for accuracy.” —William Greider, New York Times bestselling author of Who Will Tell The People?

“Patrick Sloyan has a sterling reputation as one of America's best reporters for more than half a century. His grasp of the changing American political scene over the decades is second to none. If Pat says it's so it means he has double and triple checked it before writing it. Patrick Sloyan is just about the last of the old breed of shoe-leather reporters and deserves to be read and treasured.” —Joseph L. Galloway, co-author of We Were Soldiers Once...and Young, We Are Soldiers Still, and Triumph Without Victory: A History of the Persian Gulf War

“Pat Sloyan, like me, was for years president of the Fund for Investigative Journalism so I'm familiar with his work. Let me just say that after almost 40 years with the Washington Post and now scholar in residence at American University's Investigative Reporting Workshop, I know more reporters than I can count: bad, indifferent, good, and great. Pat is one of the great ones.” —George Lardner Jr.

“Pat Sloyan is as good as it gets in my business...it's really appropriate that he has chosen to write about lying at the top -- he has seen firsthand the results of such lies on the battle field.” —Seymour Hersh, Polk Award and Pulitzer Prize-winning investigative journalist

“Any reportage by Pat Sloyan over the last fifty years has had one singular trait, it is bound to be unassailably accurate.” —James Srodes, author of On Dupont Circle: Franklin and Eleanor Roosevelt and the Progressives Who Shaped Our World

“The Politics of Deception should rank as one of the best books written about the relationship between presidents and the press. New insights and new history from a great reporter who has been there and everywhere.” —Richard Reeves, New York Times bestselling author of Daring Young Men and President Kennedy: Profile of Power

“Pat Sloyan does not scare easily. His integrity, his courage, his quiet ferocity and his common sense have long inspired his admiring colleagues.” —Roger Mudd, Peabody Award- and Emmy Award-winning news anchor