Orson Welles's Last Movie: The Making of The Other Side of the Wind (Hardcover) 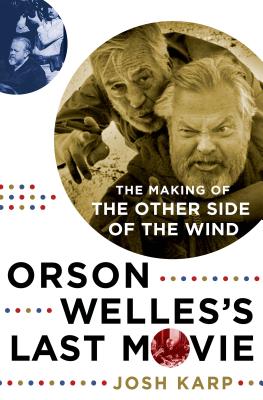 Orson Welles's Last Movie: The Making of The Other Side of the Wind (Hardcover)

Journalist Josh Karp shines a spotlight on the making of The Other Side of the Wind—the final unfinished film from the auteur of Citizen Kane in Orson Welles’s Last Movie, the basis of Oscar-winning director Morgan Neville’s Netflix Original Documentary, They’ll Love Me When I’m Dead.

The Other Side of the Wind was supposed to take place during a single day, and Welles planned to shoot it in eight weeks. It took six years during his lifetime—only to be finally completed more than thirty years after his death by The Last Picture Show director Peter Bogdanovich, who narrates the film, and released by Netflix.

Orson Welles’s Last Movie is a fast-paced, behind-the-scenes account of the bizarre, hilarious, and remarkable making of what has been called “the greatest home movie that no one has ever seen.” Funded by the shah of Iran’s brother-in-law, and based on a script that Welles rewrote every night for years, the film was a final attempt to one-up his own best work. It’s a production best encompassed by its star—the celebrated director of The Maltese Falcon, John Huston—who described the making of the film as “an adventure shared by desperate men that finally came to nothing.”

Josh Karp is a journalist and writer who teaches at Northwestern University. His first book, A Futile and Stupid Gesture, won best biography of 2006 at both the Independent Publisher Book Awards and the Midwest Book Awards. It was adapted into the 2018 Netflix film of the same name, starring Will Forte. Karp is also the author of Straight Down the Middle: Shivas Irons, Bagger Vance and How I Learned to Stop Worrying and Love My Golf Swing and Orson Welles's Last Movie: The Making of The Other Side of the Wind. His writing has appeared in Salon, The Atlantic, and Newsweek, among others.

“Supremely entertaining ...[and]... an early contender for this year's best book about Hollywood.” —Hollywood Reporter

“In Josh Karp's excellent new book, you get a sensitively rendered and panoramic depiction of that famous megalomania. Welles is as ripe a subject as any to depict Hollywood hubris, but Karp's lively tone keeps him on a balanced, human level. There's no shortage of hilarious anecdotes here. A-” —Entertainment Weekly

“Karp's propulsive chronicle of the botched production is a hall of fun-house mirrors. Welles's improvised pastiche, begun in 1970, would star John Huston as a brilliant, egotistical director laboring to finish a masterpiece before dying at the age of 70. Fifteen years later, Welles himself died at 70, his masterpiece unfinished - which was far from the end of a story as gripping, probably, as the still-unseen movie.” —New York Magazine

“Karp's conversational tone yet unerring attention to detail make this an essential book on Welles...an intimate, humorous, and staggering tale. This is easily one of the most enjoyable and informative books about Welles ever published.” —Library Journal (starred review)

“What became of The Other Side of the Wind, that crazy movie that took up the last 15 years of the life of Orson Welles? Karp puts that question to rest with this hilarious and sobering saga of one of the greatest films never finished. Luckily, there's nothing unfinished in Karp's retelling. He follows every story, dollar and last legal battle in full detail. Whether the film sees a 2015 release on the anniversary of Welles' birth, as was speculated as of late last year, we at least have Karp to thank for the next best thing.” —Kirkus Reviews

“A fascinating story, much more than your typical making-of book.” —Booklist

“Everything Welles ever did was a kind of adventure: The Other Side of the Wind--a film made up as it went along--was perhaps the greatest, maddest adventure of all. Josh Karp's absolutely riveting book recreates the whole tragic, comic enterprise, creating an unforgettable portrait of a middle-aged Welles thrashing around as only a frustrated genius could thrash around, in quest of an ever-elusive dream of film, assembled from a hundred thousand fragments of spur-of-the-minute inspirations. Like some semi-mythic warlord, Welles lays about him, bullying, terrifying, charming, lying, cheating, cajoling, manipulating, destroying, creating in pursuit of a goal he himself barely understands. Orson Welles's Last Movie is a massive contribution to Welles scholarship, and an unputdownable read.” —Simon Callow, author of Orson Welles: The Road to Xanadu and Orson Welles: Hello Americans

“If you're writing a biography of a movie, especially one by Orson Welles, it's not such a great idea to compete with your subject, unless you're sure you can pull it off. Happily, Karp does. This is the most entertaining film book I've read in years--informative, funny, and least expected, freshly researched. Orson would have loved it.” —Peter Biskind, My Lunches With Orson: Conversations Between Henry Jaglom and Orson Welles

“Like the best Hollywood stories, Josh Karp's entertaining book veers between slapstick and tragedy, and is filled with larger-than-life characters who are charmed and doomed by their own hopefulness and cynicism, charisma and buffoonery. With wit and insight, Karp has made a valuable contribution to the enduring legend of Orson Welles, and proved once again that in the movie business, improbability may be the one enduring truth.” —Julie Salamon, author of The Devil's Candy and Wendy and the Lost Boys

“Josh Karp has written a Hollywood epic as grand as any shot by Frank Capra, Preston Sturges or Orson Welles. In the end, this book is about more than a movie that was never quite finished. It's about an industry, an era and the artistic process. Funny and profound, too weird and heartbreaking to believe--Karp has added an indelible chapter to the literature of show biz.” —Rich Cohen, New York Times bestselling author of Monsters, The Avengers, and Tough Jews

“A maverick director, shady dealings, and the Iranian revolution make up the often incredible true story behind The Other Side of the Wind. Packed with revealing first-hand accounts, Orson Welles's Last Movie recounts the making and downfall of the ill-fated comeback of the film industry's most talented prodigal son.” —Ray Kelly, Wellesnet.com