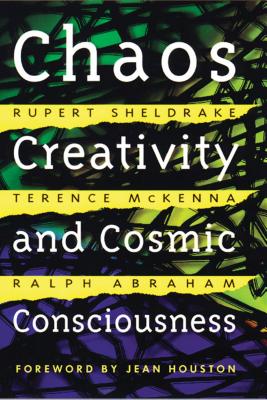 
Usually Ships in 1-5 Days
Three of the most original thinkers of our time explore issues that call into question our current views of reality, morality, and the nature of life.

• A wide-ranging investigation of the ecology of inner and outer space, the role of chaos theory in the dynamics of human creation, and the rediscovery of traditional wisdom.

In this book of "trialogues," the late psychedelic visionary and shamanologist Terence McKenna, acclaimed biologist and originator of the morphogenetic fields theory Rupert Sheldrake, and mathematician and chaos theory scientist Ralph Abraham explore the relationships between chaos and creativity and their connection to cosmic consciousness. Their observations call into question our current views of reality, morality, and the nature of life in the universe. The authors challenge the reader to the deepest levels of thought with wide-ranging investigations of the ecology of inner and outer space, the role of chaos in the dynamics of human creation, and the resacralization of the world. Among the provocative questions the authors raise are: Is Armageddon a self-fulfilling prophecy? Are we humans the imaginers or the imagined? Are the eternal laws of nature still evolving? What is the connection between physical light and the light of consciousness?

Part ceremony, part old-fashioned intellectual discussion, these trialogues are an invitation to a new understanding of what Jean Houston calls "the dreamscapes of our everyday waking life."
Rupert Sheldrake is a biologist, a former research fellow of the Royal Society at Cambridge, a current fellow of the Institute of Noetic Sciences near San Francisco, and an academic director and visiting professor at the Graduate Institute in Connecticut. He received his Ph.D. in biochemistry from Cambridge University and was a fellow of Clare College, Cambridge University, where he carried out research on the development of plants and the ageing of cells. He is the author of more than eighty scientific papers and ten books, including Dogs That Know When Their Owners Are Coming Home; Morphic Resonance; The Presence of the Past; Chaos, Creativity, and Cosmic Consciousness; The Rebirth of Nature; and Seven Experiences That Could Change the World. In 2019, Rupert Sheldrake was cited as one of the "100 Most Spiritually Influential Living People in the World" according to Watkins Mind Body Spirit magazine.

McKenna was a scholar of shamanism, ethno-botanist, psychedelic researcher and author of many books.

Ralph Abraham is the author of Dynamics: The Geometry of Behavior. He lives in California.

Jean Houston and Robert Masters are well-known pioneers of modern consciousness research and were both among the founders of the Human Potentials Movement. They also coauthored Mind Games: The Guide to Inner Space and The Varieties of Psychedelic Experience. Jean Houston is also the author of A Passion for the Possible, Godseed, and A Mythic Life. She resides in New York.
"A book for all those who seek to quest beyond the limits of the ordinary. Three fine thinkers take us plunging into the universe of chaos, mind, and spirit. Instead of leaving us lost, they bring us back with startling insights and more wonder than we knew we had."
— Matthew Fox, author of Original Blessing

" Records the exciting intellectual friendship of three amazing minds pushing to the edge of history in search of a new consciousness blending scientific observation, mythical imagination, and visionary speculation."
— Riane Eisler, author of The Chalice and the Blade

"Should be required reading for anyone who believes that science and spirituality cannot and should not interact."
— Larry Dossey, M.D., author of Space, Time and Medicine

"One finishes Chaos, Creativity, and Cosmic Consciousness with a sense of heightened awareness and wonder."
— ForeWord, 2003, Volume 6, number 2