Love is a Dog From Hell (Paperback) 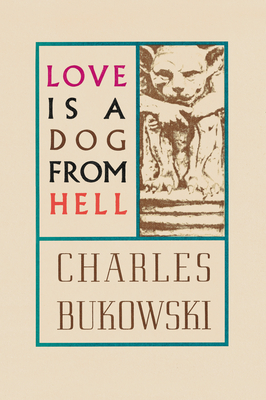 Love is a Dog From Hell (Paperback)

A classic in the Bukowski poetry canon, Love Is a Dog from Hell is a raw, lyrical, exploration of the exigencies, heartbreaks, and limits of love.

A book that captures the Dirty Old Man of American letters at his fiercest and most vulnerable, on a subject that hits home with all of us. Charles Bukowski was a man of intense emotions, someone an editor once called a “passionate madman.” Alternating between tough and gentle, sensitive and gritty, Bukowski lays bare the myriad facets of love—its selfishness and its narcissism, its randomness, its mystery and its misery, and, ultimately, its true joyfulness, endurance, and redemptive power.

"there is a loneliness in this world so great

that you can see it in the slow movement of

the hands of a clock."

Charles Bukowski is one of America’s best-known contemporary writers of poetry and prose and, many would claim, its most influential and imitated poet. He was born in 1920 in Andernach, Germany, to an American soldier father and a German mother, and brought to the United States at the age of two. He was raised in Los Angeles and lived there for over fifty years. He died in San Pedro, California, on March 9, 1994, at the age of seventy-three, shortly after completing his last novel, Pulp.

Abel Debritto, a former Fulbright scholar and current Marie Curie fellow, works in the digital humanities. He is the author of Charles Bukowski, King of the Underground, and the editor of the Bukowski collections On Writing, On Cats, and On Love.