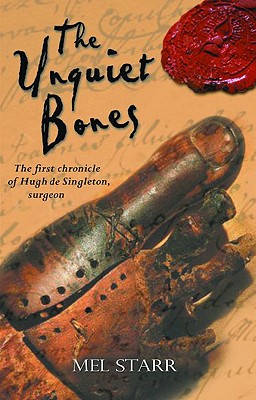 This is book number 1 in the Chronicle of Hugh de Singleton series.

A young woman's remains are found in the castle, and a surgeon is challenged to dissect the mystery and uncover the truth. Hugh of Singleton, fourth son of a minor knight, has been educated as a clerk, usually a prelude to taking holy orders. However, he feels no real calling-despite his lively faith-and he turns to the profession of surgeon, training in Paris and then hanging his sign in Oxford. Soon after, a local lord asks Hugh de Singleton to track the killer of a young woman whose bones have been found in the castle cesspool. Through his medical knowledge, Singleton identifies her as the impetuous missing daughter of a local blacksmith. The young man she loved-whom she had provoked very publicly-is quickly arrested and sentenced at Oxford. But this is just the beginning of the tale. The story of Singleton's adventure unfolds with realistic medical procedures, droll medieval wit, romantic distractions, and a consistent underlying sense of Christian compassion.

"Thoughtful and curious, surgeon Hugh is an engaging character who feels totally real."
--Rikki B.

"I enjoyed the setting, period, the very realistic characters and the dry wit."
--Donna B.

"I read all of it in one go - quite the best medieval mystery I've read in a while. I teach medieval history, so it's always nice to read something by someone who does actually know what he's talking about. Can't wait for the next one "
--Sarah T.