Without Regard to Sex, Race, or Color: The Past, Present, and Future of One Historically Black College (Hardcover) 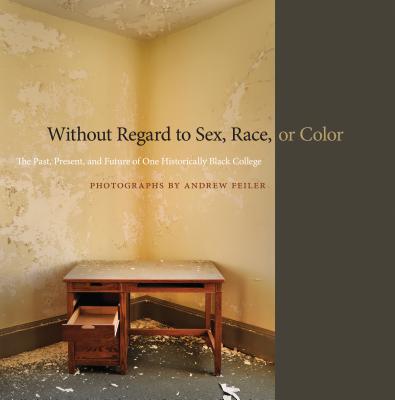 Without Regard to Sex, Race, or Color: The Past, Present, and Future of One Historically Black College (Hardcover)

This gathering of sixty images, along with the essays that frame them, gives us a new way to think about the too often troubled status of historically black colleges and universities (HBCUs). The bell in the clock tower at Atlanta's Morris Brown College bears an inscription about the ideal of educational access, that it be "without regard to sex, race, or color." Yet most of the Morris Brown campus has lain silent for more than a decade. Established in 1881, it was all but shut down in 2002 after years of fiscal hardship were capped by a mismanagement scandal. Pride still runs high among its alumni, however, and its current leadership vows to revive the school. Meanwhile, as Andrew Feiler's stirring photos show, Morris Brown is literally falling apart.

In the spirit of those photographers who have documented the physical decline of our valued institutions--from small family farms to entire cities--Feiler points his lens at one embattled place and dares us to look away. Aiming to "open minds, trigger emotion, stimulate discussion, and, perhaps, prompt action," his images project a new layer of meaning onto the Morris Brown story. We see classrooms, dorms, gym facilities, and other spaces no longer alive with students, faculty, and staff but rather mired in a state of uncertainty where hopes of normality's return mutely battle a host of unwelcome alternate futures. We see how time passes without regard for academic years, regular maintenance cycles, or the other comings and goings that would ordinarily call attention to the leaks, invading animals, acts of vandalism, and other forces working to peel the paint from Morris Brown's walls, buckle its floors, and molder its furnishings. We see garbage piling up alongside sports trophies, scientific equipment, and other vestiges of the prouder past we would rather remember. Feiler's photos are accompanied by writings that address the college's profound impact on one family, history and memory, the documentary and narrative powers of photography, and the place of HBCUs in American public life. Images and text combine powerfully to show us what happens when a place meant to be honored is left to its own.
ANDREW FEILER, a fifth-generation Georgian, is an award-winning photographer whose work has been featured in museums, galleries, and magazines and is in a number of private collections. His photography is focused on the contemporary complexities of the American South. More of his photography can be seen at andrewfeiler.com. ROBERT E. JAMES is a Morris Brown College alumnus, a former member of the Morris Brown board of trustees, and president of Carver State Bank in Savannah, Georgia. PELLOM McDANIELS III is faculty curator of African American Collections at Emory University's Woodruff Library and an assistant professor of African American studies. He is the author of The Prince of Jockeys: The Life of Isaac Burns Murphy. AMALIA K. AMAKI is an artist, writer, curator, and critic who was professor of art history and visual studies at Spelman College, the University of North Georgia, the University of Delaware, and the University of Alabama. She is the author (with Andrea Barnwell Brownlee) of Hale Woodruff, Nancy Elizabeth Prophet, and the Academy. LORETTA PARHAM is CEO of Atlanta University Center's Woodruff Library.