War Upon the Land: Military Strategy and the Transformation of Southern Landscapes During the American Civil War (Environmental History and the American South) (Hardcover) 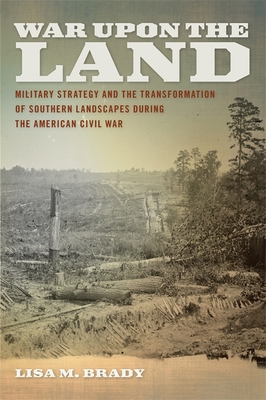 War Upon the Land: Military Strategy and the Transformation of Southern Landscapes During the American Civil War (Environmental History and the American South) (Hardcover)

In this first book-length environmental history of the American Civil War, Lisa M. Brady argues that ideas about nature and the environment were central to the development and success of Union military strategy.

From the start of the war, both sides had to contend with forces of nature, even as they battled one another. Northern soldiers encountered unfamiliar landscapes in the South that suggested, to them, an uncivilized society's failure to control nature. Under the leadership of Ulysses S. Grant, William Tecumseh Sherman, and Philip Sheridan, the Union army increasingly targeted southern environments as the war dragged on. Whether digging canals, shooting livestock, or dramatically attempting to divert the Mississippi River, the Union aimed to assert mastery over nature by attacking the most potent aspect of southern identity and power--agriculture. Brady focuses on the siege of Vicksburg, the 1864 Shenandoah Valley campaign, marches through Georgia and the Carolinas, and events along the Mississippi River to examine this strategy and its devastating physical and psychological impact. Before the war, many Americans believed in the idea that nature must be conquered and subdued. Brady shows how this perception changed during the war, leading to a wider acceptance of wilderness. Connecting environmental trauma with the onset of American preservation, Brady pays particular attention to how these new ideas of wilderness can be seen in the creation of national battlefield memorial parks as unaltered spaces. Deftly combining environmental and military history with cultural studies, War upon the Land elucidates an intriguing, largely unexplored side of the nation's greatest conflict.
LISA M. BRADY is an associate professor of history at Boise State University. She is the associate editor for the journal Environmental History.