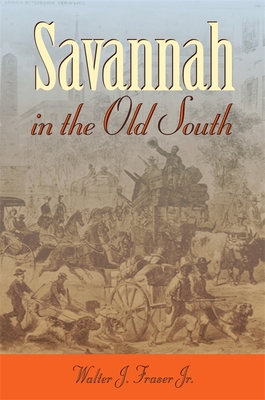 This is book number 9 in the Wormsloe Foundation Publication series.

This flowing, instantly engaging narrative tells the story of Savannah from the hopeful arrival of its first permanent English settlers in 1733 to the uncertainties faced by its Civil War survivors in 1865. Alongside the many women and men of European, African, and Native American heritage who helped shaped Savannah's first century and a half, Walter J. Fraser Jr. also shows how war, disease, market forces, fire, and other circumstances left their marks on the city and its people.

Among other major developments in Savannah's history, Fraser recalls the hardships of its first residents; the depredations of the Revolutionary War; the relocation of Georgia's capital away from the city; the growth of commerce through railroads and steamships; the establishment of public institutions such as the Female Asylum for orphaned and abandoned girls and the Poor House and Hospital; and the emergence of public education, a professional police force, and other elements of an urban infrastructure.

More than any previous history of the city, Savannah in the Old South points out how whites and blacks, bondpeople and free men and women often interacted in ways that smoothed away the rough edges of racism. From Savannah's physical layout to its cosmopolitan culture, from its social services network to its racially diverse poor neighborhoods, the city offered opportunities for daily contact between blacks and whites that did not exist in the surrounding rural areas.

By the eve of the Civil War, Savannah had become Georgia's major commercial and cultural center and the region's sixth largest city. The story of its remarkable growth is told here with an eye for telling facts and human drama.

Walter J. Fraser Jr. is professor emeritus in the Department of History at Georgia Southern University. His many books include "Savannah in the Old South" and "Lowcountry Hurricanes" (both Georgia), "Portraits of Conflict: A Photographic History of Georgia in the Civil War," and "Charleston! Charleston!"

"With clear, straightforward writing and impressive research, Savannah in the Old South is a real contribution in its chronicling of post-1800 events in Savannah from the perspective of African Americans (slave and free), immigrants, and women. It will appeal to readers who want to know more about Savannah, including those who have read the unflattering Midnight in the Garden of Good and Evil."--Edward J. Cashin, Emeritus Director, Center for the Study of Georgia History, Augusta State University

"At last!—the scholarly, yet highly readable, history of Savannah that we have long been waiting for. In Savannah in the Old South, Jay Fraser has crafted a much-needed documented analysis of this dynamic tidewater trading town. This outstanding book about antebellum Savannah fills a long-neglected void—it is steeped in objectivity and provides an attention to detail that has been lacking in early histories."--Buddy Sullivan, author of Early Days on the Georgia Tidewater

[Fraser] has written a good scholarly history of the city. . . . Fraser, on these 400 or so pages, captures something of the Savannahian paradox—much of its humanizing influence, its culture was created on the bent, lacerated backs of slaves. . . . Savannah in the Old South will clearly nourish the city's perennial fascination with its forebears."--Savannah Morning News

"Walter J. Fraser Jr.'s is the first comprehensive, scholarly study of the city's past. . . . This is a richly detailed, readable portrait of a complex community. Fraser's time frame is far greater than the book's title suggests; he begins with the Indian trading center established on the Carolina side of the Savannah River in the late seventeenth century and ends with William T. Sherman's occupation of the city late in the Civil War. First and foremost a social and cultural history, Fraser's book is as multifaceted as any full-fledged urban history must be, with the city's economic and political-and military-experiences fully integrated into the narrative. . . . With this book, Fraser seals his reputation as one of the foremost of southern urban historians. He reminds us once again just how integral cities such as Savannah, while seemingly anomalous bastions of racial and ethnic diversity and interaction, were to the culture and character of the larger region of which they were a part."--Journal of American History

"This book is full of the rich history of one of the greatest and most beautiful cities in the country."--Valdosta Daily Times

"A deft synthesis of a bewildering amount of information, without sacrificing flavor or accuracy. Few tasks are more difficult than summarizing a mass of interesting and important material, but again and again, Fraser does just that. . . . General readers and scholars alike will find much . . . that will bring both profit and pleasure.”--Georgia Historical Quarterly

"Savannah in the Old South offers a broad, useful view of life in Georgia's first city. Fraser has created a lush tapestry from which future historians might work.”--Southern Historian

"Savannah in the Old South vividly demonstrates, with engaging prose and solid research, how European, African and Native American men and women influenced the city's development during the first one hundred thirty years. Filling a historiographic void, Fraser has judiciously blended political, economic, and social history to show how the Civil War, combined with free market forces, social circumstances, and other factors have left their marks on the city, reshaping Savannah and its society for the unforeseen future."--Florida Historical Quarterly