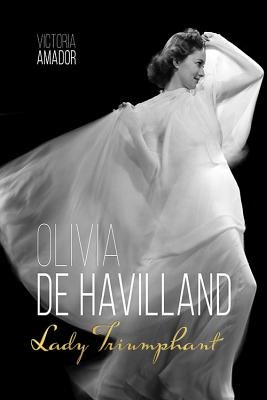 By Victoria Amador
$34.95
On Our Shelves Now

Legendary actress and two-time Academy Award winner Olivia de Havilland is best known for her role as Melanie Wilkes in Gone with the Wind (1939). She often inhabited characters who were delicate, elegant, and refined. At the same time, she was a survivor with a fierce desire to direct her own destiny on and off the screen. She fought and won a lawsuit against Warner Bros. over a contract dispute that changed the studio contract system forever. She is also noted for her long feud with her fellow actress and sister Joan Fontaine -- a feud that lasted from 1975 until Fontaine's death in 2013.

Victoria Amador utilizes extensive interviews and forty years of personal correspondence with de Havilland to present an in-depth look at the life and career of this celebrated actress . Amador begins with de Havilland's early life -- she was born in Japan in 1916 to affluent British parents who had aspirations of success and fortune in faraway countries -- and her theatrical ambitions at a young age. The book then follows her career as she skyrocketed to star status, becoming one of the most well-known starlets in Tinseltown. Readers are given an inside look at her love affairs with iconic cinema figures such as James Stewart and John Huston, and her onscreen partnership with Errol Flynn, with whom she starred in The Adventures of Robin Hood (1938) and Dodge City (1939 ). After she moved to Europe in the mid-1950s, de Havilland became the first woman to serve as the president of the Cannes Film Festival in 1965, and remained active but selective in film and television until 1988.

Olivia de Havilland Lady Triumphant is a tribute to one of Hollywood's greatest legends, who has evolved from a gentle heroine to a strong-willed, respected, and admired artist.

Victoria Amador has taught at a number of universities in the United Kingdom, United States, and in other countries. She is the author of The Gothic Portal: An Online Resource for Academics And Aficionados Of Gothic Cultural Productions From 1976 To 2008, and a number of articles on the gothic in film and literature.