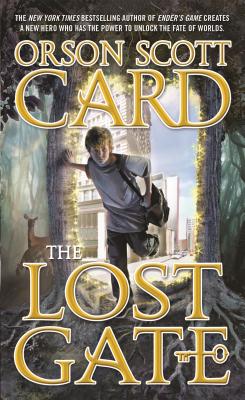 Orson Scott Card's The Lost Gate is the first book in the Mithermages series from the New York Times bestselling author of Ender's Game.

Danny North knew from early childhood that his family was different, and that he was different from them. While his cousins were learning how to create the things that commoners called fairies, ghosts, golems, trolls, werewolves, and other such miracles that were the heritage of the North family, Danny worried that he would never show a talent, never form an outself.

He grew up in the rambling old house, filled with dozens of cousins, and aunts and uncles, all ruled by his father. Their home was isolated in the mountains of western Virginia, far from town, far from schools, far from other people.

There are many secrets in the House, and many rules that Danny must follow. There is a secret library with only a few dozen books, and none of them in English — but Danny and his cousins are expected to become fluent in the language of the books. While Danny's cousins are free to create magic whenever they like, they must never do it where outsiders might see.

Unfortunately, there are some secrets kept from Danny as well. And that will lead to disaster for the North family.

The Mithermages series
The Lost Gate
The Gate Thief
Gatefather

Orson Scott Card is best known for his science fiction novel Ender's Game and its many sequels that expand the Ender Universe into the far future and the near past. Those books are organized into the Ender Saga, which chronicles the life of Ender Wiggin; the Shadow Series, which follows on the novel Ender's Shadow and is set on Earth; and the Formic Wars series, written with co-author Aaron Johnston, which tells of the terrible first contact between humans and the alien "Buggers." Card has been a working writer since the 1970s. Beginning with dozens of plays and musical comedies produced in the 1960s and 70s, Card's first published fiction appeared in 1977--the short story "Gert Fram" in the July issue of The Ensign, and the novelette version of "Ender's Game" in the August issue of Analog. The novel-length version of Ender's Game, published in 1984 and continuously in print since then, became the basis of the 2013 film, starring Asa Butterfield, Harrison Ford, Ben Kingsley, Hailee Steinfeld, Viola Davis, and Abigail Breslin.

Card was born in Washington state, and grew up in California, Arizona, and Utah. He served a mission for the LDS Church in Brazil in the early 1970s. Besides his writing, he runs occasional writers' workshops and directs plays. He frequently teaches writing and literature courses at Southern Virginia University.

He is the author many science fiction and fantasy novels, including the American frontier fantasy series "The Tales of Alvin Maker" (beginning with Seventh Son), and stand-alone novels like Pastwatch and Hart's Hope. He has collaborated with his daughter Emily Card on a manga series, Laddertop. He has also written contemporary thrillers like Empire and historical novels like the monumental Saints and the religious novels Sarah and Rachel and Leah. Card's work also includes the Mithermages books (Lost Gate, Gate Thief), contemporary magical fantasy for readers both young and old.

Card lives in Greensboro, North Carolina, with his wife, Kristine Allen Card. He and Kristine are the parents of five children and several grandchildren.

“As always, everyone will be struck by the power of Card's children, always more and less than human, perfect yet struggling, tragic yet hopeful, wondrous and strange.” —Publishers Weekly starred review on Ender's Shadow

“Threads from all the other books in the series flow through this narrative, which fills gaps, fleshes out familiar characterizations, and introduces well-limned new ones. Ender's angst, combined with his handling of the intrigue swirling around him, ensures the depth for which the series is famous.” —Booklist on Ender in Exile