The Lord-Protector's Daughter: The Seventh Book of the Corean Chronicles (Mass Market) 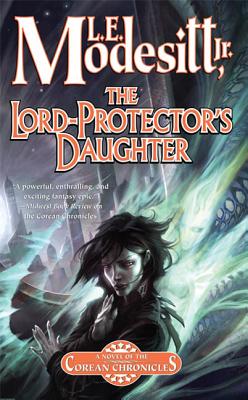 This is book number 7 in the Corean Chronicles series.

Millennia ago, a magical disaster caused the fall of a great worldwide civilization, the end of a golden age. New civilizations have fought their way up from the ancient destruction and chaos, knowing little of the lost world that preceded them or the details of its fall. Corus today is a world of contending countries, of humans, but also of strange animals and supernatural creatures. It is a place of magical powers, and of a few people who are talented enough to use them.

Mykella, the eldest daughter of the Lord-Protector of Lanachrona, discovers that someone is diverting significant sums of money from her father's treasury. While investigating, she uncovers more than she bargained for, and is sent by an ancient soarer to find her Talent in order to save her land—and her world.

Other series by this author:
The Saga of Recluce
Imager Portfolio
The Spellsong Cycle
The Ghost Books
The Ecolitan Matter

“Modesitt reveals again why success follows his novels. The characters are flawless, his world building continues to enchant and there is always plenty of conflict and mystery.” —Romantic Times BOOKreviews

“The characters have become more fascinating with each novel; moreover, this one includes even more action than either of its predecessors . . . which contributes mightily to brining the adventures of Dainyl, Alector of Corus, and Mykel, an officer in the native military corps, to a stunning conclusion while leaving enough unanswered questions for many more Corean stories.” —Booklist (starred review) on Soarer’s Choice

“Modesitt's well-developed characters, including his typically ethical protagonists, the unraveling of various Alector plots, and the action-packed revolt sequences will attract new readers to join Modesitt's many fans anxiously awaiting this volume.” —VOYA on Soarer’s Choice

“Corus is a fascinating land, full of both new and ancient magic, and the inhabitants are possibly the most fascinating of all, with complex motivations underpinning their every action.” —Romantic Times BOOKreviews on Alector’s Choice

“A powerful, enthralling and exciting fantasy epic. . . . The protagonist is a hero for going into battle against an enemy that is more powerful than he is. His love for his wife adds a romantic dimension that humanizes the larger than life champion. Scepters is an outstanding fantasy.” —Midwest Book Review on Scepters

“Legacies is for people who . . . want to see their characters grow and like to fill in the blanks themselves rather than have the author do it for them. . . . With a likable character in an intriguing land, Legacies is off to a promising start.” —Starlog on Legacies