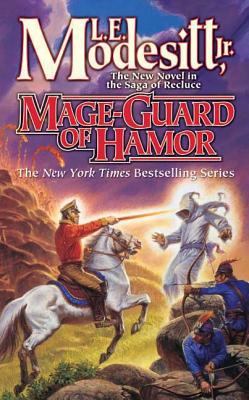 This is book number 15 in the Saga of Recluce series.

L.E. Modesitt, Jr.'s Mage-Guard of Hamor continues his bestselling fantasy series the Saga of Recluce, which is one the most popular in contemporary epic fantasy.

As young apprentice on the island of Recluce, Rahl was sent to the mages training school for testing before he was banished to Hamor. Now, Rahl is a powerful mage and still just as dangerous to himself and to others. His education continues, but Rahl soon finds that as his powers have increased, so has the amount of trouble he attracts.

“An intriguing fantasy in a fascinating world.”—Robert Jordan, New York Times bestselling author of The Wheel of Time® series

Other Series by L.E. Modesitt, Jr.
The Imager Portfolio
The Corean Chronicles
The Spellsong Cycle
The Ghost Books
The Ecolitan Matter

“Mage-Guard measures up well to Modesitt at his best.” —Booklist

“Fans of Modesitt's Recluce books will likely love this latest addition to the series…..Rahl is a well-crafted protagonist with believable reactions to the world around him, and the high level of ordinary detail describing Hamor and Recluce never gets in the way of the story.” —RT Book Reviews

“The sequel to Natural Ordermage explores a new part of Modesitt's world and once again displays the author's abilities to tell stories that shine with the veracity of everyday life as well as momentous events.” —Library Journal