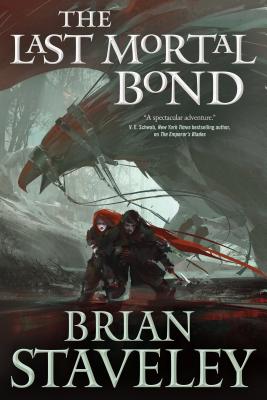 The trilogy that began with The Emperor's Blades and continued in The Providence of Fire reaches its epic conclusion, as war engulfs the Annurian Empire in Brian Staveley's The Last Mortal Bond

The ancient csestriim are back to finish their purge of humanity; armies march against the capital; leaches, solitary beings who draw power from the natural world to fuel their extraordinary abilities, maneuver on all sides to affect the outcome of the war; and capricious gods walk the earth in human guise with agendas of their own.

But the three imperial siblings at the heart of it all--Valyn, Adare, and Kaden--come to understand that even if they survive the holocaust unleashed on their world, there may be no reconciling their conflicting visions of the future.

On The Last Mortal Bond:

“Darker and fiercer than the other two books […] the way Staveley crafts the ending, bringing everything together, is just masterful.” —Speculative Herald

“The Chronicle of the Unhewn Throne is a trilogy that’s gone from strength to strength as it’s gone on—that’s gotten not just bigger but measurably better with every increasingly vital volume—and it’s my pleasure to tell you that The Last Mortal Bond is, without question, Staveley’s most impressive and immersive effort yet […] What I didn’t expect was that it would take my breath away. But it did.”—Tor.com

“Staveley shows how to end a fantasy epic with The Last Mortal Bond.”—io9

“One of the most brutal, gut-wrenching, raw, emotional, masterfully told, brilliantly plotted, beautifully written series I have ever had the pleasure of reading.”—The Book Eaters

“A phenomenon like the Chronicle of the Unhewn Throne comes along once in a lifetime.”—The Qwillery

“Epic does not even begin to describe this dramatic third and final installment in the Chronicle of the Unhewn Throne.”—Bibliosanctum

“The perfect ending to a fantastic trilogy.”—Beauty in Ruins

On The Providence of Fire:

“A stunning follow-up... Most definitely recommended.” —Beauty in Ruins

“It’s one of those books that is an experience rather than a story. Brian Staveley is not only an invaluable new voice to the epic fantasy genre, and the literary world at large, but he’s on his way to being one of the greats.” —The Book Geek

On The Emperor's Blades:

“Will hold your attention until the last page. This intense novel is impossible to put down.” —RT Book Reviews
“Staveley puts his protagonists to the test and is wise enough to allow them shortcomings even as they develop extraordinary abilities.” —Publishers Weekly

“Filled to the brim with history, lore and potential…a modern epic fantasy mixed in with a nice dose of Lovecraftian weirdness.” —io9

“Familiar ingredients come to life in the hands of a promising new master chef.” —Locus

“Staveley creates a richly layered world that melds together elements of ancient magic, religion, political intrigue and battles large and small. The suspense is relentless and the moral compromises the protagonists confront, often accompanied by violence, are wrenching.” —Shelf Awareness

“A spectacular adventure, by turns elegant and brutal, and one I couldn't put down. The Emperor’s Bladesis expertly crafted and wickedly sharp.” — V.E. Schwab, New York Times bestselling author of A Gathering of Shadows

“The Emperor’s Blades is a complex and fast-moving fantasy set in a world where treachery and intrigue are everywhere, accomplished through ferocious brutality and subtle intrigues, and everything in between, and where no one is what he or she seems, including the three children of the slain emperor of Annur, who seek who is behind the assassination – if they can even survive a world where powers of all sorts, some dating back millennia, if not longer, seek their own ends, and where everyone’s motives are anything but obvious.”—L. E. Modesitt, Jr., New York Times bestselling author of the Imager Portfolio

“Brian Staveley introduces himself to the field of epic fantasy as a storyteller to watch with an exciting first salvo involving Machiavellian politics on multiple levels, an intriguing world of magic,and three protagonists whose personal journeys after the murder of their father - the emperor - may not only save or destroy everything they hold dear but will also keep the reader impatiently waiting for the next book!”—Richard A. Knaak, New York Times Bestselling author for The Legend of Huma

“Intricate characters, complex relationships, and plots within plots... these are the hallmarks of great fantasy and Staveley succeeds across the board. A brilliant debut!” —Jason Hough, New York Times bestselling author of The Darwin Elevator

“Takes a story of family, loss, conspiracy and revenge and gives it new legs. It's epic fantasy with a sharp, jagged edge to it, a modern sensibility, prose as tight as the leather wrapped around a sword's hilt, and characters that you can relate to and give a damn about. I look forward to the next installment of Staveley's chronicle.” —R. S. Belcher, author of The Six-Gun Tarot

“Staveley brings together a richly imagined world and vibrant characters, and serves them up with monks and monsters, tension and treachery--an exhilarating adventure.” —Elspeth Cooper, author of Songs of the Earth

“A vividly imagined story of conspiracy and empire.” —Col Buchanan, author of Farlander
“Here, Staveley has delivered on what this reader seeks; an embracing of what is enjoyable about the genre in a fun, very engaging debut and launch book for Chronicles of the Unhewn Throne.”—SFFWorld.com

“This is epic fantasy for a new generation, gritty and grim at times, but never losing sight of the awe and the wonder.”—Beauty in Ruins