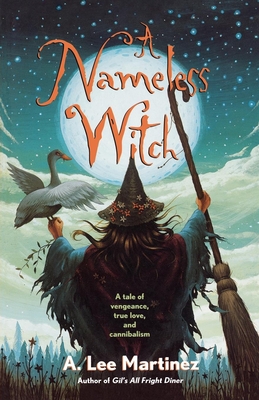 A tale of vengeance, true love, and cannibalism

Being born undead can have its disadvantages, such as eternal youth and flawless beauty ---things most unsuitable for a witch. Hiding behind the guise of a grimy old crone, the witch is content living outside Fort Stalwart with her unlikely band of allies: a troll named Gwurm, an enchanted broom, and a demonic duck named Newt. She leads a simple life filled with spells, potions, and the occasional curse.


So when a White Knight arrives at Fort Stalwart, the witch knows her days of peace are at an end. The Knight is just days in front of a horde of ravenous goblings, and Fort Stalwart lies right in the horde's path. But the goblings are just the first wave of danger, and soon the witch and the Knight must combine forces on a perilous quest to stop a mad sorcerer from destroying the world.

Filled with menace, monsters, and magic, A Nameless Witch is a properly witchly read by the award-winning author of Gil's All Fright Diner and In the Company of Ogres.

A. Lee Martinez is the acclaimed author of several science fiction and fantasy novel including Gil's All Fright Diner, which won the Alex Award, In the Company of Ogres, A Nameless Witch, The Automatic Detective, and Too Many Curses, among others. Martinez lives in Texas.

“Fans of Douglas Adams will happily sink their teeth into this combo platter of raunchy laughs and ectoplasmic ecstasy.” —Publishers Weekly (starred review) on Gil's All Fright Diner

“[A] laugh-out-loud comic fantasy that should appeal to fans of Terry Brooks's Landover novels.” —Library Journal on Gil's All Fright Diner

“Delightfully droll, this comic romp will be a crowd-pleaser.” —Booklist on Gil's All Fright Diner

“Can a vampire find true love with a ghost? Can a teenage witch open the gates of Hell? Anything can happen in A. Lee Martinez's wacky debut.” —Charlaine Harris, bestselling author of Dead to the World

“Martinez's follow-up to Gil's All Fright Diner is as joyfully fast paced and funny. In the Company of Ogres tweaks fantasy clichés most excellently.” —Booklist

“Martinez's broad humor should appeal to fans of the late Douglas Adams and other contemporary authors of comic fantasy.” —Library Journal on In the Company of Ogres