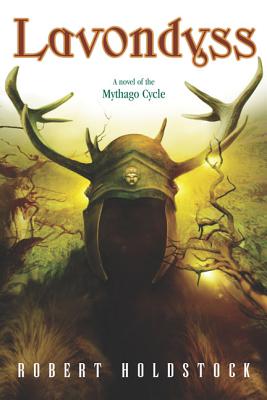 This is book number 2 in the The Mythago Cycle series.

A haunting entry in the World Fantasy Award-winning Mythago Cycle

In Mythago Wood, Robert Holdstock gave us an intricate world spun from the stories of Irish and English mythology, a great forest steeped in mystery and legend, whose heart contains secrets that will change all who behold them.

Young Tallis is one such seeker. When she was just an infant, she lost her brother Harry to Ryhope Wood. Her adolescent fancies now cause her to suspect that he is still alive---and in grave danger. Tallis follows Harry into the primal Otherworld armed only with magic, masks, and clues left by her grandfather. Eventually the primitive forest gives way to Lavondyss itself, a fascinating and terrible realm where she is forced to confront the mythagos, physical manifestations of the legends of humanity's collective unconscious.

Join Tallis on her quest into the ultimate unknown, and be invited into one of the finest and most compelling mythologies you will ever encounter.

"Magical . . . It is rare to find a sequel which measures up to its original; but Lavondyss surpasses it."
--Times Literary Supplement

Robert Holdstock is the author of the World Fantasy Award-winning Mythago Wood, widely considered one of the most significant fantasy novels of the 20th century. He lives in rural England not far from London.
"Magical…It is rare to find a sequel which measures up to its original; but Lavondyss surpasses it." —Times Literary Supplement