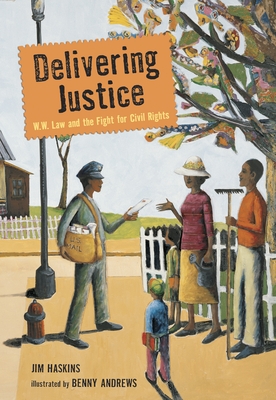 A gripping biography of the mail carrier who orchestrated the Great Savannah boycott — and was instrumental in bringing equality to his community.

"Grow up and be somebody," Westley Wallace Law's grandmother encouraged him as a young boy living in poverty in segregated Savannah, Georgia. Determined to make a difference in his community, W.W. Law assisted blacks in registering to vote, joined the NAACP and trained protestors in the use of nonviolent civil disobedience, and, in 1961, led the Great Savannah Boycott. In that famous protest, blacks refused to shop in downtown Savannah. When city leaders finally agreed to declare all of its citizens equal, Savannah became the first city in the south to end racial discrimination.

A lifelong mail carrier for the U.S. Postal Service, W.W. Law saw fostering communication between blacks and whites as a fundamental part of his job. As this affecting, strikingly illustrated biography makes clear, this "unsung hero" delivered far more than the mail to the citizens of the city he loved.

JIM HASKINS, the author of more than one hundred books, has an unparalleled background in nonfiction for young readers. He received the Coretta Scott King Medal for THE STORY OF STEVIE WONDER, and several other of his titles were named Coretta Scott King Honor Books. What the author most admires about W. W. Law, he says, is "his complete dedication to the causes in which he believed — first equal rights and later the preservation of historic sites of importance to black people. He was truly an unsung hero."

BENNY ANDREWS is a painter, printmaker, cultural leader, and arts advocate. His work can be found in more than thirty major museums. His other books for children include THE HICKORY CHAIR by Lisa Rowe Fraustino, PICTURES FOR MISS JOSIE by Sandra Belton, and SKY SASH SO BLUE by Libby Hathorn. Of DELIVERING JUSTICE he says, "Working on this book was very emotional for me — it was like reliving those times."