The Voyage of the Beagle: The Illustrated Edition of Charles Darwin's Travel Memoir and Field Journal (Hardcover) 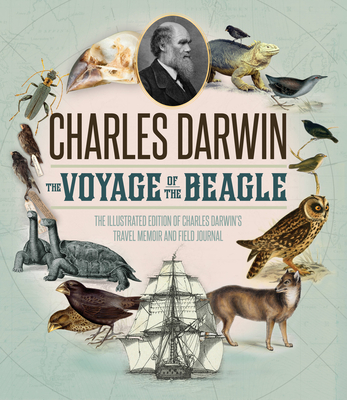 The Voyage of the Beagle: The Illustrated Edition of Charles Darwin's Travel Memoir and Field Journal (Hardcover)

Enjoy the best-selling memoir of Charles Darwin's journey of discovery aboard the HMS Beagle--now fully illustrated for the first time.

The Voyage of the Beagle is Darwin's fascinating account of his groundbreaking sea voyage that led to his writing On the Origin of Species.

When the HMS Beagle sailed out of Devonport on December 27, 1831, Charles Darwin was only twenty-two and setting off on the voyage of a lifetime. His journal reveals him to be a naturalist making patient observations concerning geology and natural history as well as people, places, and events. He witnessed and visited volcanoes in the Galapagos, saw the Gossamer spider of Patagonia, sailed through the Australasian coral reefs, and recorded the brilliance of the firefly--these recollections are found in these extraordinary writings. The insights made on the five-year voyage set in motion the intellectual currents that led to the most controversial book of the Victorian age: On the Origin of Species. An introduction on the background to Darwin's work, as well as notes, maps, appendices, and an essay on scientific geology and the Bible by Robert FitzRoy, Darwin's friend and captain of the Beagle, provide context for this incredible story.

This volume is the first fully illustrated edition of Darwin's journal and includes excerpts of On the Origin of Species so the reader can connect the author's journey with his discovery that made him famous.

Charles Robert Darwin was an English naturalist and geologist, best known for his contributions to evolutionary theory. He published his theory of evolution with compelling evidence in his 1859 book On the Origin of Species, overcoming scientific rejection of earlier concepts. Darwin's scientific discovery is the unifying theory of the life sciences, explaining the diversity of life on Earth.