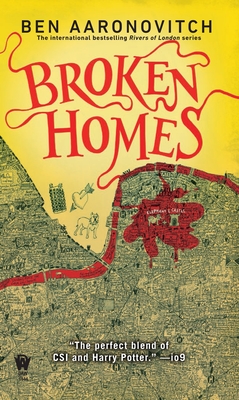 This is book number 4 in the Rivers of London series.

A mutilated body in Crawley. A killer on the loose. The prime suspect is one Robert Weil, possibly an associate of the twisted wizard known as the Faceless Man. Or maybe just a garden-variety serial killer.

Before apprentice wizard and Police Constable Peter Grant can even get his head 'round the case, two more are dropped in his lap: a town planner has gone under a tube train, and there's a stolen grimoire for Grant to track down.

So far, so London.

But then Peter gets word of something very odd happening on a housing estate designed by a nutter, built by charlatans, and inhabited by the truly desperate.

Is there a connection?

And if there is, why oh why did it have to be South of the River—in the jurisdiction of some pretty prickly local river spirits?
Ben Aaronovitch was born in London in 1964 and had the kind of dull routine childhood that drives a man either to drink or to science fiction. He is a screenwriter, with early notable success on BBC's legendary Doctor Who, for which he wrote some episodes now widely regarded as classics, and which even he is quite fond of. After a decade of such work, he decided it was time to show the world what he could really do, and embarked on his first serious original novel. The result is Midnight Riot, the debut adventure of Peter Grant. He can be contacted at his website, http://www.the-folly.com/.
"A low-income housing tower gone awry, an old enemy with a bone to pick...and a shocker of an ending—Broken Homes is a delight." —Charlaine Harris, #1 New York Times-bestselling author