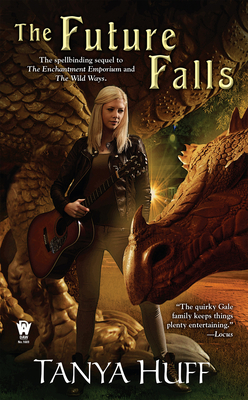 This is book number 3 in the The Enchantment Emporium series.

When Auntie Catherine warns the family of an approaching asteroid, the Gales scramble to keep humans from going the way of the dinosaurs. Fortunately for the world, they're wielding a guitar and a dragon.

The Gale family can change the world with the charms they cast, which has caused some supernaturally complicated family shenanigans in the past. So when NASA and Doomsday Dan confirm Auntie Catherine's dire prediction, Charlotte "Charlie" Gale turns to the family for help.

...and Jack. The Dragon Prince, and a Sorcerer.

But Charlie might like Jack just a little too much, and Jack might like Charlie a little too much in return. Actually, between Allie's hormones, the Aunties trying to force her and Jack into ritual, the Courts having way too much fun at the end of days, and Jack's sudden desire to sacrifice himself for the good of the many, Charlie's fairly certain that the asteroid is the least of her problems.

The Gales are going to need more than pie to save the world from an incoming asteroid. But together there isn't anything they can't deal with – except possibly each other.
Tanya Huff may have left Nova Scotia at three, and has lived most of her life since in Ontario, but she still considers herself a Maritimer. On the way to the idyllic rural existence she shares with her partner Fiona Patton, six cats, and a chihuahua, she acquired a degree in Radio and Television Arts from Ryerson Polytechnic—an education she was happy to finally use while writing her recent Smoke novels. Of her previous twenty-three books, the five—Blood Price, Blood Trail, Blood Lines, Blood Pact, Blood Debt—featuring Henry Fitzroy, bastard son of Henry VIII, romance writer, and vampire are among the most popular.
Praise for the Enchantment Emporium series:

"Fantasy buffs will find plenty of humor, thrills and original mythology to chew on, along with refreshingly three-dimensional women in an original, fully realized world." —Publishers Weekly

“It’s a great adventure, full of music and magic and just a little goofy at times, thanks to the delightful oddities of the Gales.” —Locus

"Combine Huff’s ability to blend ancient traditions seamlessly into the modern world and make them seem perfectly normal with her characters who are appealing and fun to hang out with, and you’re in for an amazing read." —Seattle Post-Intelligencer

"Combining Celtic folklore, musical references, and a love of nature and magic, this sequel to The Enchantment Emporium will appeal to Huff’s many fans and to readers who like their urban fantasy with more depth and character development.” —Library Journal

“Quintessential Huff -- sharp, clean, funny. A heady mix of music, place and people that rings true on every level. Once again, I find myself hoping that this is a series that will go on.” —Green Man Review

"The Wild Ways is big fun from start to finish.... It’s got humor and drama, it’s fast-paced and sexy.... Huff just doesn’t write cookiecut characters; hers are fully rounded with many facets to their personalities. Whether you’re rejoining the Gale family or meeting them for the first time, I think you’ll be as delighted with this book as I am." —Charles de Lint