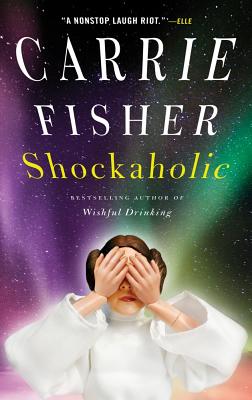 
Email or call for price.
This memoir from the bestselling author of Postcards from the Edge and Wishful Drinking gives you an intimate, gossip-filled look at what it’s like to be the daughter of Hollywood royalty.

Told with the same intimate style, brutal honesty, and uproarious wisdom that locked Wishful Drinking on the New York Times bestseller list for months, Shockaholic is the juicy account of Carrie Fisher’s life. Covering a broad range of topics—from never-before-heard tales of Hollywood gossip to outrageous moments of celebrity desperation; from alcoholism to illegal drug use; from the familial relationships of Hollywood royalty to scandalous run-ins with noteworthy politicians; from shock therapy to talk therapy—Carrie Fisher gives an intimate portrait of herself, and she’s one of the most indelible and powerful forces in culture at large today. Just as she has said of playing Princess Leia—“It isn’t all sweetness and light sabers”—Fisher takes readers on a no-holds-barred narrative adventure, both laugh-out-loud funny and poignant.
Carrie Fisher (1956–2016) became a cultural icon as Princess Leia in the first Star Wars trilogy. She starred in countless films, including Shampoo and When Harry Met Sally. She is the author of Shockaholic; Wishful Drinking (which became a hit Broadway production); and four bestselling novels, Surrender the Pink, Delusions of Grandma, The Best Awful, and Postcards from the Edge.