African-American Inventions That Changed The World: Influential Inventors and Their Revolutionary Creations (Paperback) 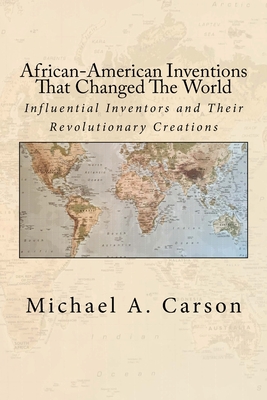 African-American Inventions That Changed The World: Influential Inventors and Their Revolutionary Creations (Paperback)

By Michael A. Carson


Usually Ships in 1-5 Days
A considerable amount of the world's most influential inventors have been African-American, which is a fact that is often overlooked.Throughout history, African-Americans inventors have played a pivotal role in creating revolutionary inventions that has impacted our lives in various ways. These pioneers have contributed to the fields of medicine, agriculture, science and technology, to name a few.In the 1800's, many of these innovators were born into slavery and were not allowed to acquire a formal education, they were faced with countless obstacles and had to triumph over many adverse conditions. Nevertheless, these inventors have made significant contributions to the World.African-American men and women have left their mark in both American and World History. Many of their innovative creations would not exist today if it wasn't for their brilliant minds and creative ideas.The incredible inventors mentioned in this book have collectively created over 500 inventions. They represent some of the amazing men and women who have impacted our lives through their intelligence and ingenuity.
Michael A. Carson is a husband and father. He was born and raised in Queens, New York. He has a Bachelors Degree in Psychology from Virginia State University. He now resides with his family in Atlanta, Georgia working as a Government Analyst. What began as a conversation teaching his son about African-American inventors, continued as a passion for Michael. He wanted to educate the next generation about the many contributions African-American inventors have made in our society. Michael and his wife Shenika co-founded Double Infinity Publishing. Their goal is to publish high quality literature that represents historical facts as well as provide a voice and platform for educating readers.