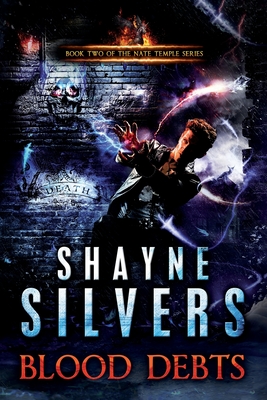 This is book number 2 in the Temple Chronicles series.

A Wizard, an Angel, and a Horseman of the Apocalypse walk into a bar...

The ancient pact between mankind, Heaven, and Hell has been broken. And this upstart wizard's quest for vengeance may have just kicked off Armageddon. So, time for a drink... or maybe two.

Already plagued with sinister night terrors that could qualify him as a card-carrying psychopathic insomniac, Nate can barely even manage to put his pants on in the morning, let alone pick teams for the Apocalypse.

But when he's framed as a demon sympathizer, condemned by the Armies of Heaven, and hunted down by both his allies and the Four Horsemen, this wizard doesn't think it can get any worse...

Then they take away his magic. And a wizard without magic stands no chance against the forces of Heaven and Hell...

If you like Jim Butcher, Kevin Hearne, or Patrick Rothfuss, you will LOVE the second installment of The Nate Temple Supernatural Thriller series.

INTERVIEW WITH THE AUTHOR:

Q: So, what makes the Nate Temple series special?

A: I wanted to write a series of stories that mirrored the books I liked to read in my childhood. My top picks were usually urban fantasy, paranormal best sellers, and of course, books featuring your classic gritty, pulp-fiction heroes. Basically, anything with a lot of creepy crawly supernatural characters: mythical creatures, ancient heroes, super villains, and gods. You will find that my stories focus on the ancient myths, characters, and stories we all know, fear, and love. Then twist them up and toss them back like an empty beer can.

Q: What order should I read the books in?

A: I've written the series with the intent that they should be read in order to get the full effect of the bigger picture; however the stories can be read in any order if you are looking for a quick, fast-paced romp through Adrenaline-ville. I suggest the following sequence:

Q: So, why should readers give these books a try?

A: Because the Nate Temple series is a present day thrill-ride that takes no prisoners. Dragons, Angels, Demons, Greek Legends, Wizards, werewolves, and a whole slew of other supernatural 'Freaks' abound in my stories. Blood Debts has hit the top ten bestsellers list on Kindle for Urban Fantasy and Paranormal. The plot twists and turns until the last page, and my twisted sense of humor will have you cackling out loud at things you really shouldn't be laughing at.

Shayne is the guy itching for confrontation, oozing testosterone from more pores than the average male has room for. He is a published author of fiction novels and currently makes a living in the commercial lending realm for a nationally known bank in the Midwest. He hails from Denver, but has survived from New York City, to Miami, to Los Angeles, to Chicago, and even across the pond in London, before finally settling in Missouri where he not so secretly works on the global domination plan he intends to achieve by his mid-thirties. He holds two high-ranking black belts in the Martial Arts, loves coffee, drinks adrenaline before going to bed, and wishes he could share a glass of wine with Alexander the Great, Achilles, and Thomas Jefferson... at the same time. He dresses like the world is his red carpet, and is the father of a bearded baby man-ling with his wife, the Duchess of Russia. He is currently hard at work on the third installment of The Temple Chronicles, and hopes that you enjoyed reading Nate's story as much as he enjoyed writing it.